Difference between LAN and WAN

Key Difference: LAN is a computer network that connects computers in small areas. WAN is a network that covers a broad area using private or public network transports.

The terms LAN and WAN are often confusing for people that aren’t that tech savvy. These are both connections that allow users to connect their computer to a network, including the internet. LAN is short for Local Area Network, while WAN is short for Wide Area Network. These two differ from each other in distinct ways. 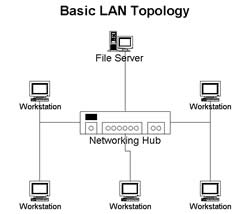 LAN is a computer network that connects computers in small areas such as home, office, school, corporation, etc. using a network media. It is useful for sharing resources such as printers, files, games, etc. A LAN network includes a couple of computer systems connected to each other, with one system connected to a router, modem or an outlet for internet access. The LAN network is built using inexpensive technologies such as Ethernet cables, network adapters and hubs. However, other wireless technologies are also available to connect the computer through a wireless access. In order to configure a LAN network, a person may also require specialized operating system software. The most popular software includes the Microsoft Windows’ Internet Connection Sharing (ICS), which allows users to create LAN.

The first successful LAN network was created by Cambridge University in 1974 known as the Cambridge Ring; however it was not commercialized until 1976 by Datapoint Corporation. Datapoint’s ARCNET was installed at Chase Manhattan Bank in New York in 1977. The main purpose of creating a LAN was to share storage and other technologies such as printers, scanners, etc. The smallest LAN can include two computers, while the largest can, in theory, support 16 million devices according to About.com. Wikipedia states that “the larger LANs are characterized by their use of redundant links with switches using the spanning tree protocol to prevent loops, their ability to manage differing traffic types via quality of service (QoS), and to segregate traffic with VLANs.” The larger LANs also employ other devices such as switches, firewalls, routers, load balancers, and sensors. 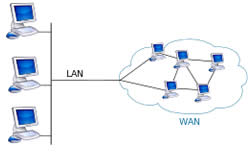 WAN is a network that covers a broad area using private or public network transports. The best example of WAN would be the Internet, which can help connect anyone from any area of the world. Many businesses and government use WAN in order to conduct business from anywhere in the world. WANs are also responsible largely for businesses that happen across the world (i.e. a company in UK does business with a company in China). The basic definition of WAN includes a network that can span regions, countries, or even the world. However, in practicality, WAN can be viewed as a network that is used to transmit data over long distances between different LANs, WANs and other networking architectures.

WANs allow the computer users to connect and communicate with each other regardless of location. WAN uses technologies such as SONET, Frame Relay, and ATM. WANS allow different LANs to connect to other LANs through technology such as routers, hubs and modems. There are four main options for connecting WANs: Leased line, Circuit switching, Packet switching and Call relay. Leased lines are point-to-point connection between two systems. Circuit switching is a dedicated circuit path between two points. Packet switching includes devices transporting packets via a shared single point-to-point or point-to-multipoint link across a carrier internetwork. Call relay is similar packet switching but uses fixed length cells instead of variable length packets.

LANs are become more and more common in many places such as offices, corporations, homes, etc. A main reason for their growing popularity is that they are cheaper to instill and offer higher transfer speeds. LANs offer speeds up to 80 or 90 mbps due to the proximity of the computer systems to each other and lack of congestion in the network. In comparison, WANs can provide a speed of 10 to 20 mbps. Also LANs offer better security compared to WANs, which are more easily accessible with the people that know how to hack systems. WANs and LANs can be secured using firewalls, anti-virus and spyware softwares.

A detailed description is available below:

good for my exam

I am totally confused. If an internet connection applyed to a LAN I think it automatically change to WAN.