Difference between Meiosis in Males and Females

Key Difference: Meiosis in males and females differ greatly in context to aspects like timing and continuity of events. The process in males and females also differ especially in terms of the actual gamete produced. Meiosis in males starts after puberty and continues throughput life. On the other hand, in females, the process begins nearly at the 12th week of fetal life and it does not resume until puberty. 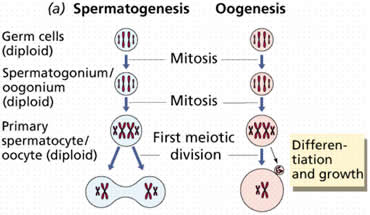 Meiosis is the specialized process through which division of cells takes place in order to form gametes. This process includes a single round of DNA replication which is followed by two rounds of cell division. The chromosome number is reduces to half during this process. It takes place in the germ line, testes and ovaries in mammals. This meiotic process is quite different from each other in context to mammal’s sexes; males and females.

Human male meiosis is termed as spermatogenesis, whereas female meiosis in female is termed as female oogenesis. In human males, it takes place in the seminiferous tubules of the testicles, whereas, it occurs in oogonia in females. The process takes place in two steps – Meiosis I and Meiosis II. Meiosis I is the process in which gametes split into two and are reduced into the two. Then crossing over of few of the chromosomes takes place which are taken from each of the parent. Finally, the chromosomes are equally distributed in these two halves. This process is called reductional division due the reduction of chromosome number into half the original number.

In Meiosis II, internal splitting of the daughter cells takes place and results into four daughter cells with .This process is identical to mitotic division. The four haploid cells contain a single copy of each chromosome. 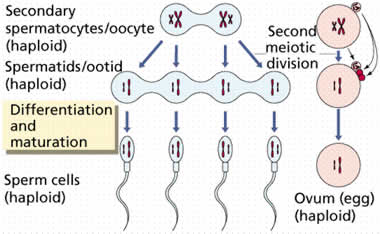 In males, this process occurs at puberty, whereas in females it is initialed in fetal development. In mammals, these four haploid spermatids are of similar size and are derived from each spermatogonium, whereas in females the cytoplasmic divisions are very asymmetric. The female line reduces to one enlarged haploid cell as other haploids are not able to survive. On the other hand, male line reduces to an equal number of haploid cells.

Another difference is in the terms of size of full grown ooctyes in ovary which are much larger  then sperms. Eggs are non-motile and round in shape. They have yolk for nourishing the developing embryos. On the other hand, sperm are made up of a head, tail and middle-part, and they are motile.

In females, the process of completion of meiosis is delayed for months or years, on the other hand, meiosis in males is completed in days or weeks. Unlike Spermatogenesis, Oogenesis is not a continuous process throughout the life of an organism. In females, the process starts in utero where oogonia enter meiosis but are not able to enter Prophase I until ovulation. The oogonia enter the process of meiosis again before their release, and then get arrested in metaphase II. It gets completed in females only when the egg is fertilized.

Thus, there are many differences between meiosis in males and females. However, the main difference between the two is that the process of meiosis produces sperms in males and ova in females.

Comparison between Meiosis in Males and Females:

I believe that in the table the number of haploid cells are wrong. In meiosis its the males who have the tetrad cells not the female. It should be the other way around.

Thank you for pointing it out. It has been fixed now.