Difference between Nerve and Vein

Key Difference: Veins are large return vessels of the body which carry blood to the heart. They can be considered as blood return counterparts of arteries. Nerves are bundles of axons constituting the peripheral nervous system. They transmit information between periphery and central nervous system. 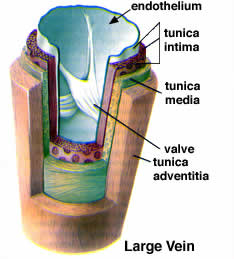 Veins are important blood vessels of the circulatory system. They transport blood to the heart. This blood is generally deoxygenated except form the pulmonary vein which goes form the lungs to the heart.

The structure of veins is quiet similar to arteries. It comprises of three layers. The outer most layer is known as Tunica Adventitia. It is very strong covering and comprises of connective tissues, collagen and elastic fibers. Next to it is the Tunica Media which is also known ass the middle layer. It comprises of smooth muscle and elastic fibres. Last is the Tunica Intima which is the innermost layer and comprises of smooth endothelial cells. The hollow section which carries blood is known as the lumen. They also contain valves which makes sure to avoid the back flow of blood. Veins contain blood under low pressure. Veins are originally red in color due to the blood content, however skin acts as a filter for the color and it is perceived as green. 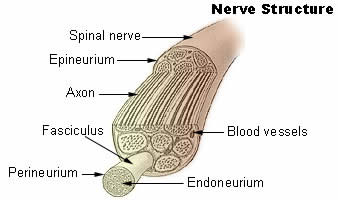 Nerves are bundles of axons constituting the peripheral nervous system. Axons are fragile and thin cellular extensions through which neurons the specialized cells are able to send and receive signal to other cells. An axon is first wrapped in a connective tissue covering known as endoneurium.

These individual axons group to from fascicles which are wrapped in a covering consisting of connective tissue called the perineurium. Many of the fascicles are covered together by another layer of connective tissue known as epineurium in order to form a whole nerve.  Nerves behave as highways by carrying signals between the brain and spinal cord and to the rest of the body. Nerves generally are found running along borders of other structures especially between different muscle groups. Most of the nerves are very small and almost invisible but most that can be seen are a pale yellow, almost white.

Thus, nerves and veins are completely different from each other. They are diffeent in context to structure, function, etc.

Comparison between Nerve and Vein: