Difference between Pinocytosis and Phagocytosis

Both pinocytosis and phagocytosis are types of endocytosis. Endocytosis is a process by which cells absorb molecules by engulfing them. These molecules often include proteins and other substances which are important for the cell’s existence. The process of endocytosis is used by all cells as the molecules are large polar molecules that cannot pass through the hydrophobic plasma or cell membrane. 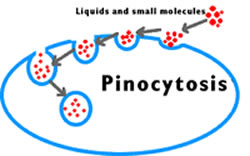 Phagocytosis is the process of absorbing and ingestion of particles by the cell and by many protests, such as amoeba to acquire nutrients. The absorption process is similar to pinocytosis, except that instead of liquid the absorbed substance are essential nutrients, which are surrounded by channel and then pinch off into vesicles. The nutrients are then fused with lysosomes and broken down by enzymes. Any and all waste material is then expelled from the cell. 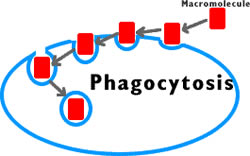 Phagocytosis is synonymous with eating for single-celled organisms, however in multicellular animals, this process has been adapted to eliminate waste and debris, as opposed to taking in nutrients and fuel for cellular processes. This is especially the case for cells in the immune system which uses phagocytosis to remove pathogens and other cell debris, including but not limited to bacteria, dead tissue cells, and small mineral particles.

The substance absorbed by phagocytosis can be as large as the cell, which requires the cell to create vesicles big enough to surround the nutritents. However, in pinocytosis, the vesicles are much smaller, as they only need to surround liquids, which don’t have a specific shape. Technically, pinocytosis works as phagocytosis, the only difference being that phagocytosis is specific in the substances it transports. This is due to the fact that phagocytosis engulfs whole particles, which are later broken down by enzymes, and absorbed into the cells, whereas pinocytosis mainly absorbs already-dissolved or broken-down food.