Difference between Yogurt and Dahi

Key difference: Derived in similar styles, Yogurt and Dahi are dairy foods that are used and consumed widely. A notable difference between these two is that Yogurt is prepared by pasteurizing milk, whereas Dahi is prepared by boiling milk, then cooling it to room temperature, and finally adding the previous day's mild acidic curd to it. 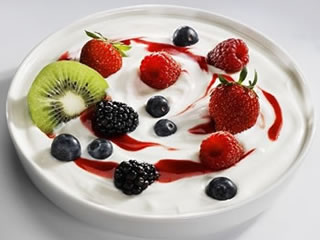 Yogurt is a milk product that is prepared by fermenting milk through induction of yogurt cultures in it. These yogurt cultures or live cultures are nothing but the bacteria used in making yogurt. Being probiotic in nature, these bacteria are actually beneficial to the human body system. They are the source of vital ingredients such as proteins, vitamins and other helpful enzymes. The scientific names of these bacteria are Lactobacillus delbrueckii and Streptococcus thermophilus.

The milk used to make yogurt can range from a wide variety of sources such as, coconut milk, almond milk, soy milk, nut milk, etc. Among animals, cow’s milk is most widely and popularly used source for producing yogurt. This is because cow milk contains casein, an important content that goes into making yogurt. In absence of cow’s milk, milk from animals such as water buffaloes, goats, ewes, mares, camels, and yaks is used to turn out yogurt. One interesting fact about yogurt is that it is industrially manufactured all over the world, for consumption in form of various flavors such as fruit flavored yogurt, Swiss style yogurt, etc.

Yogurt is known by the name Dahi, in the Indian subcontinent. Dahi is hugely popular and loved in this part of the world. A standout attribute that makes dahi different from yogurt is that it is made by boiling milk and not pasteurizing it, as it done for making yogurt. In Western culture, curd formation in milk during fermentation is undesirable. Whereas in countries like India, curd formation in milk is much desired. This is the reason why yogurt is also known as curd, or curds in these parts, as it is produced by curdling milk. 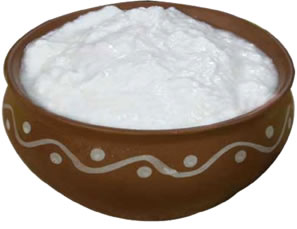 Cow’s milk is considered to be the most advantageous and sacred for making dahi. Like yogurt, dahi is a major source of essential elements that are needed to sustain a human body, such as proteins, vitamins, minerals and mineral enzymes, etc. Dahi is consumed raw or used as an ingredient itself, in a variety of delicacies such as dahi vada, dahi chaawal, dahi bhalla, etc. Dahi is also consumed in liquid forms in various parts of India, Pakistan, Bangladesh, etc. as Lassi, chaas, mattha, etc. As per many ancient Indian records and Hindu mythology, dahi or yogurt is one among the five elixirs, or Panchamrita, which is consumed by the Gods.

Therefore, the difference between yogurt and dahi is very infinitesimal, but not at all negligible.

Comparison between Yogurt and Dahi: