Difference between Zigbee and RF

Key Difference: ZigBee is a RF standard that has been specifically designed and developed for low power, low data rate wireless monitoring and control applications present across a large number of distributed nodes. RF stands for Radio Frequency. It refers to a frequency or a band of frequency lying in the range of 10 kilohertz to 300,000 megahertz. These rays are suitable for radio communications and broadcasting.

ZigBee is a specification for a set of wireless protocols that have been designed for data transfer by low power devices. It is based on an IEEE 802.15 standard. ZigBee has been developed by the ZigBee Alliance. This alliance is an open and non-profit association. The protocols of ZigBee are extensively used for producing personal area networks using small and low powered digital radios.

ZigBee based networks were developed as the alternative to Wi-fi and Bluetooth technology. It was required for lower power consumption and for longer battery lives. It is used to create networks that require a low data rate. One of the important features for ZigBee is that it is capable of providing a secure communication with the help of 128-bit cryptographic keys. One of the popular uses of ZigBee is wireless sensor networks using the mesh topology. Mesh topology allows the communication between nodes in both direct and indirect manner. The ZigBee Alliance provides full testing and certification of ZigBee enabled products in order to ensure interoperability. 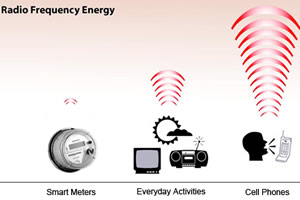 RF stands for Radio Frequency. It refers to a frequency or a band of frequency lying in the range of 10 kilohertz to 300,000 megahertz. These rays are suitable for radio communications and broadcasting. A specific form of the electromagnetic waves is basically used to communicate wirelessly in IEEE 802.11 networks. This particular form of wave is known as a radio frequency wave or an RF wave. Thus, an RF-based system is the one which depends upon the characteristics of electromagnetic wave theory to provide data and voice communication wirelessly.

Various protocols/standards are developed to make use of Radio frequency like GSM, CDMA, LTE, ZigBee, Bluetooth, etc. It is very difficult to compare Zigbee and RF as ZigBee is a technology that makes use of the radio frequency. It uses the 2.4 GHz radio frequency to deliver a range of dependable and convenient standards anywhere in the world.

Comparison between ZigBee and Bluetooth: