Difference between Apple and Samsung

Apple and Samsung are two of the most advanced companies. People usually get confused while purchasing and choosing any of the brands. Let us understand both the companies briefly.

Apple’s self-identity is its capital “I”, which means Innovating. Apple has come a long way. The Apple Computer Company first released its personal computer, Apple I in 1976. It was designed and marketed by Steve Jobs and Steve Woznaik. Apple has placed itself in the most redefining moment of 5th generation. It has developed an extremely efficient and effective supply chain.

The Apple system is divided among different types of operating systems: Mac line of computers, the iPod music player, the iPhone smartphone, and the iPad tablet computer. The CEO of Apple, Steve Jobs removed the word ‘computer’ from the company's name and introduced iPhone on January 9, 2007. In the revenue list, Apple is the world’s second largest information technology company. Apple brand loyalty is considered unusual for any product.

The company’s most recent versions of Apple for all types of devices include: Apple iPad in 2010, from where it started a new trend of tablets, and iPhones allow 3G, 4G, Wi-Fi and many other capabilities and run on the iOS operating system, making the iPhone a smartphone. Products like Apple TV, Mac, iPad, iPod, iPhone and various softwares are the most known products that are selling tremendously in the market. 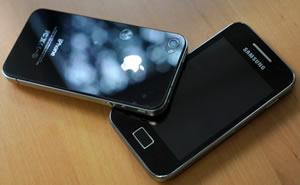 On the other hand, Samsung is better positioned for growth and has greater upside potential. The founder of the Samsung Company is Lee Byung-Chul. It was founded in 1938 as a trading company. For the last so many years, the group has expanded into areas including food processing, textiles, insurance, securities and retail. Since mid-1970s, Samsung has extended its activities all over the world, and electronics, particularly mobile phones and semiconductors, have become its most significant source of profits.

Despite the two companies’ differences, they have both arrived at the same point as on top of the global smartphone market.

Comparison between Apple and Samsung: