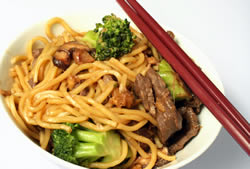 Noodles are an important ingredient of many South East Asian countries, specifically China. Chinese food has become quite a popular cuisine in many countries and has been gaining significant attraction in recent years. Two dishes that are often confused by many people are Lo Mein and Chow Mein. This is because both of these dishes include noodles and may seem similar. However, they are different.

While many people believe that Lo Mein and Chow Mein uses two different kinds of noodles, they’d be surprise to know that both of these dishes use the same noodles. The difference lies in how the noodles are prepared. The term ‘lo’, ‘chow’ and ‘mein’ can easily help distinguish the difference between these dishes. ‘Lo’ means “mix”, ‘chow’ means “fry” and ‘mein’ means “noodles”. Using this translation we can easily assume that ‘Lo Mein’ means “mixed noodles”, while ‘Chow Mein’ means “fried noodles”.

To create Lo Mein, the egg noodles are tossed into the wok and heated with other elements, such as vegetables and meat, being added to the wok. They are tossed around and then removed and served. Another way to prepare Lo Mein is to toss and cook the vegetables before and then add the noodles towards the end just to heat it up. Lo Mein has large amount of sauces to provide it with flavor. The flavor infuses in the vegetables during it being tossed in the work. The sauce can also be added from above to already prepared noodles and vegetables. 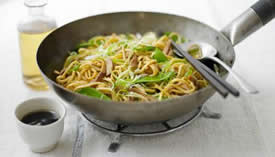 Although, the manner of creating the noodles stays the same, additional components vary depending on the chef and the style of cooking. There are many different recipes that include Lo Mein and Chow Mein.