Key Difference: The Elantra and Verna are both sedan cars designed by Hyundai. However, the Hyundai Elantra is considered superior than the Verna as it has more power and features.

The Hyundai Elantra is a car that was launched in 1990 and is still in production. It is in its fifth generation which was launched in 2010. The same car is marketed as Hyundai Avante in South Korea. The fifth generation Elantra follows the fluidic sculpture design of Hyundai. It is being produced and sold in most of the markets of the world; though the name may differ. It is available in two engine options i.e. petrol/gasoline and diesel; both with engine capacities of 1.8 and 1.6 litre. The features include music system, rear air conditioning vents, rear parking sensors with camera, Bluetooth, rear defogger and wiper, etc. In India, there are two engine options i.e. 1.8 litre petrol/gasoline and 1.6 litre diesel with manual and automatic transmissions. 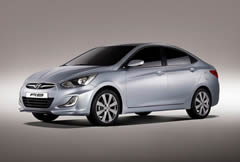 The Hyundai Verna is a sedan car that is also marketed as the Accent in many countries and markets. The production of the Hyundai Accent/Verna was started in 1995 and is in its fourth generation in the market. The fourth generation Verna/Accent was launched in November 2010. Many hatchback versions of the car are also available in different markets. The Hyundai Verna is available in the 1.4 litre and 1.6 litre petrol; as well as 1.4 litre and 1.6 litre diesel options in various markets. In India, all the four options are available for the customers. It has features like Brake Assistance, ABS, audio system with Bluetooth and USB playback, etc.

both elantra diesel and verna diesel have the same engine.... is the power any different.