Difference between Windows 8 and Windows 8.1

Key difference: Windows 8 and Windows 8.1 are latest versions of Microsoft's Windows operating system. Windows 8.1 looks similar to that of Windows 8, but consists of more advanced and updated features. 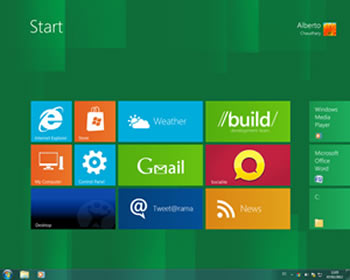 Windows 8 is an updated and the latest Microsoft operating system. It is the eighth version of Microsoft Windows and was released in the market on October 26, 2012. It is a complete redesign of the previous operating system, which can be accessed faster with an user friendly approach. It has Live Tiles, which is an exciting and attractive feature.

Windows 8 is an improved version of Windows 7, with the most notable and updated user-interface display attractions. This primarily consists of the "Start screen" made up of "Live Tiles," which are links to applications and features. These tiles are developed to work dynamically and are updated in real time. They provide one-click access for common programs, games, and utilities. The tile-based interface was formerly called “Metro”. This feature makes Windows 8 a suitable operating system for both the traditional PCs and tablets. While screening, these features enable the users to switch from one app to another app. Examples of the tiles are Photos, Videos, Music, Internet Explorer, Maps, and Weather. Several of the tiles, such as the Maps, Weather, and custom social networking tiles, can also dynamically display the updated information.

Windows 8 is available in the standard, Pro, and Enterprise editions. The Pro edition primarily offers additional networking and encryption options, as compared to the standard edition. The Enterprise editions include the virtualization features and an additional utility called as the “AppLocker”, which prevents the unwanted software from being installed on a computer. Windows 8 features the latest Internet Explorer Web browser, Internet Explorer 10, as well as integrated cloud-based online services like Microsoft’s app store and Office 365. It is built to support the newer technologies like the USB 3.0 and Bluetooth 3. The features associated with the Windows 8 operating system are: 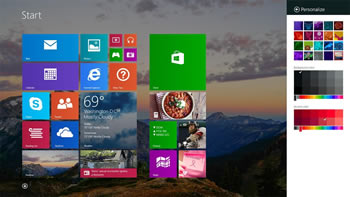 Windows 8.1 (codename “Blue”), is the first major updated version of Windows 8 and RT. It was officially announced and introduced by Microsoft on May 14, 2013. Windows 8.1 was released to OEM hardware partners on August 27, 2013, and released publicly as a free download through Windows Store on October 17, 2013.

Windows 8.1 is an updated and improved version of Windows 8. It is specially developed to overcome the flaws of Windows 8. In this version the “Metro” shells are more advanced. Along with their basic functionality, the user can also snap the tiles and correspondingly view half the screen. The user can also use up to four apps on a screen at once depending on the screen size. Additional customization options such as, expanded color choices, new tile sizes, new backgrounds, the ability to use the desktop wallpaper as background, and the ability to default "All Apps" views were added to the Start screen. Windows 8.1 operating system has a developed a desktop Control Panel along with the more integrated Sky-Drive desktop application.

Windows 8.1 has proved to be the best OS for business tablets. It is basically useful in the mobile applications related to business forums. As it is the latest advanced and updated version of Windows 8, it supports the applicative features like office productivity work, searching and browsing, and accessing the data. It works on tablets, mobile phones, light notebook, and on high performance workstations. It is too user-friendly while operating, as it enables the user to operate the commodities in their desired way

Comparison between Windows 8 and Windows 8.1: