Difference between Sonos and Apple TV

Key difference: Sonos is an electronic company of audio equipment, which allows the online streaming of music through their wireless HiFi music system. Apple TV is a digital media receiver, which streams any video content stored in the computer on to the widescreen television. 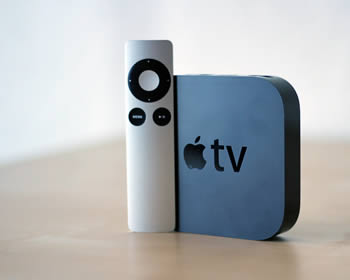 Apple TV is a digital media receiver developed and sold by Apple Inc. It is a small network appliance designed to play digital content from the iTunes Store, Netflix, Hulu Plus, YouTube, Flickr, iCloud, MLB.tv, NBA League Pass, NHL GameCenter, Disney Channel, Disney XD, Vevo, The Smithsonian, The Weather Channel, ESPN, HBO GO, Sky News, Crunchyroll, Qello or  Windows computer running iTunes on an enhanced-definition or high-definition widescreen television. It was unveiled as a work in progress called "iTV" in 2006. It was demonstrated as the Front Row interface using the Apple Remote. It is often referred to as a "short Mac Mini".

Apple TV allows consumers to use an HDTV set to view photos, play music and watch videos originating from limited Internet services or a local network. The first generation of Apple TV included videos from iTunes, Flickr, Mac and YouTube. The second generation added Netflix. Both models supported the downloading or streaming of videos. It outputs video through an HDMI port and the audio is supported through the optical or HDMI port. The device has WiFi which helps it connect to the internet for online streaming of videos. Once downloaded, the content is stored on the device, and an internet connection is no longer required. AirPlay allows iOS devices or an AirPort-enabled computer with the iTunes music player to send a stream of music to multiple stereos connected to an Apple TV. Apple TV supports the following audio, video, and picture formats: Video - H.264 up to 1080p at 30 frames per second, Picture – JPEG, GIF, TIFF. It is Compatible with high-definition TVs with HDMI and capable of 1080p or 720p at 60/50 Hz.

Apple TV can also be controlled by many infrared remote controls or paired with them, including the Apple remote to prevent interference from other remotes. Either kind of remote can control playback volume, but only for music. The original Apple TV had a modified build of Mac OS X v10.4 Tiger which was similar to Front Row user interface. For upgrading, they were organized in six groups: movies, TV shows, music, YouTube, podcasts, and photos. It was later merged with 2nd generation user interface.

The second generation Apple TV runs on a version of iOS, rather than the modified Mac OS X of the original model. The interface is similar to that of the first generation, with only slight modifications.

Sonos is a Santa Barbara, California consumer based electronics company founded in 2002 by John MacFarlane. The company’s main product is the Sonos Multi-Room Music System. 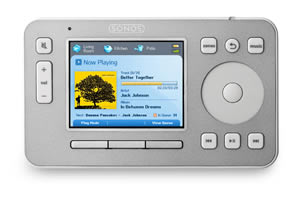 The Sonos Wireless HiFi System allows the streaming of music from internet sources in multiple rooms. It has long range capacity which can also be extended as required. The Sonos control system applications are available in Android, iOS platforms and Kindle Fire. This music system consists of two main players; first is the all in one speaker and second is the components. The components can be directly connected to speakers, amplifiers or receivers. The all-in-one speakers allow any room with a power outlet to play audio. There is also a wireless Subwoofer that easily connects to all-in-one speakers or the amplified component. Multiple elements in a single household can be connected to each other through a network called as SonosNet. It helps play music simultaneously in different rooms, as it provides a strong connection. This system offers a high quality music experience.

This system comes with Desktop Controller software which runs on Mac and Windows computer. The Controller is a free application, which allows the device to become a controller for Sonos via an existing home wireless network. It uses a CIFS (Common Internet File Sharing) system or a NAS (Network Attached Storage) drive for streaming music to a stereo. The NAS provides a computer free solution for accessing music. It can stream music in a multi-room in many formats including MP3, AAC, Ogg Vorbis, FLAC up to 16 bit / 44.1 kHz. With a proper broadband connection, the system can access to a variety of audio content completely independent of a computer.

Comparison between Sonos and Apple TV: