Difference between a Nerd, Geek and Dork 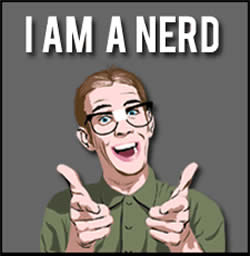 ‘Nerd’, ‘geek’ and ‘dork’ are three popular words which are parts of the informal slang language that is mainly used by youngsters. What happens when somebody says that he is a nerd? What kind of image is created in your mind? You might think that he is foolish, intelligent, boring, and/or an introvert kind of person. Similarly, when someone tells you about a geek, your mind creates an image of that person and you relate the words like intelligent, passionate and fan of gadgets with that person. On the other hand, when someone says what kind of silly things he is engaged in?

These words sometimes create a confusion as even if one or two traits of a nerd, a geek or a dork are present in a person then he is also described as any one of them. It is not wrong, as the definitions have undergone several evolving phases and the context might slightly differ. However, in this article the main focus is on the current or modern usage of these words. 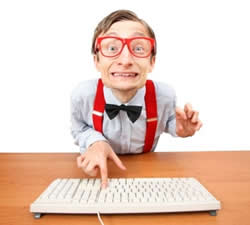 'Nerd' has been coined by Dr. Suess in 1950. In his story ‘If I ran the Zoo’, he describes a character that is a grumpy humanoid with unruly hair and sideburns. This character wore a black t-shirt. This kind of style got associated with the word nerd. Thus, we can say that nerd was used to describe a comical character which had unpleasant characteristics. The usage and meaning have also changed in the following years and lots of speculations were made. During 1970, the word also got spelled as ‘Nurd’ meaning:-

Someone with objectionable habits or traits; an affected person

It was in the year 1971 that people got the meaning of nerd as slang, that everyone uses today. It is often used to refer to an intellectually slow or foolish person.

The story behind the word 'geek' is also very interesting. The word was originally used as an insult. The first documented usage of this word can be traced back to 1916. The term was used to define the circus performers who used to perform crazy stuff. The performances also started to be known as geek performances. The word is supposed to be derived from the ‘geck’, a German word meaning fool or freak. However, nowadays the term 'geek' is used to refer to someone who is overtly passionate about something, such as a particular book or video game. For example: Harry Potter geek or Dungeons and Dragons geek. The term usually has nothing to do with intelligence. 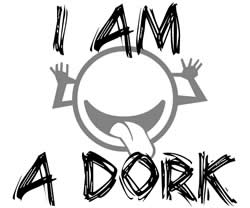 Dork is used to refer to a person who is dull, foolish, stupid, and is excellent at doing silly things. They are socially lacking, and they feel that they are the coolest person on Earth. They are somewhat similar to geek. They are the person with whom one doesn't feel to hang around or chit-chat with. Dorks try to interact with others but their efforts are of no use because nobody wants to talk to them. They are totally lacking in social and intellectual skills. Their company will not make others feel proud and over-whelmed, rather due to their foolishness and clumsiness, others feel awkward and are sometimes embarrassed.

Comparison between a Nerd, Geek, and Dork: