Difference between Bison and Water Buffalo

Key Difference: Bison and Water buffalo are two different types of bovidic animals. However, they differ in looks, size, weight, behavior, diet and many other factors.

Bison and water buffalos are often confused as they are similar in looks and even have a similar taxonomy. Both the bison and water buffalo belong to kingdom (Animalia), class (Mammalia), order (Artiodactyla), family (Bovidae), but differ in genus and species. These two animals are different from each other in many ways.

Bison can be divided into two subspecies depending on their location: The American Bison and The European Bison. The European bison is also known as wood bison or wisent, while the American bison is often called American Buffalo, though it should not be mistaken with a buffalos. 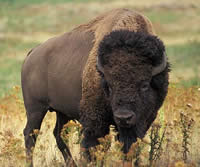 The European bison were almost hunted to extinction during 1919-1927 but since then have been reintroduced to the wild from captivity. They were often hunted during the Middle Ages for their hide and horns. They are now marked as Vulnerable by the IUCN. The European bison are large stocky creatures and can range between 7 and 10 ft in length and are between 5 and 7 ft tall. The tail ranges between 30 and 60 cm (12 and 24 in) in length. They also weight from 300 to 920 kg (660 to 2,000 lb), while some can even go up 2,200 lbs in captivity. European bison are herbivores and can be found mostly in large meadows or near water resources as water plays a huge part in their diet. The European bison are native to many parts of Europe including Russia, Ukraine, Poland, Germany, Belarus, etc. The Wisents are herd animals and can reside in mixed herds as well as bachelor herds. Reproduction is usually done by adult males, and gestation period lasts around 264 days; the female births only one offspring at one time. Wisents are not territorial and can share their land with multiple herds. The lifespan of a wisent can range between 13-21 in the wild and up to 30 years in captivity.

The American bison is a species of bison that are native to North and South America and were nearly extinct due to commercial hunting and slaughter in the 19th century and due to the spread of the bovine disease. Due to reserves and national parks, they have been resurged and are now marked as Near Threatened by the IUCN. The American bison can be further classified into two subspecies: the plains bison (Bison bison bison) and the wood bison (Bison bison athabascae). The wood bison is bigger than the plains bison and has a taller squarer hump, while the plains bison has a smaller rounder hump. The bison has a thicker, shaggier winter coat and a lighter color and lighter weight summer coat. The American bison’s head and body length ranges from 6.6 to 11.5 ft long and shoulder height of 60 to 73 in. The tail is between 12 and 36 in long. The male bison are generally bigger compared to female bison. The bison can weight from 318 to 1,000 kg (700 to 2,200 lb). Bison are herbivore and feed on grasses and sedges and can be found on near pastures, prairies and plains. They also consume a lot of water and snow as a part of their diet. American bison are raised for their meat and their hide, though they have not been able to be domesticated yet. The American bison are migratory animals and their herd migrations can be directional as well as altitudinal.  Female and male bison reside in separate herd that only mix during breeding season. The male bison play no part in the raising of the young, and the female birth one offspring at one time. The lifespan of an American bison is 13-25 years. 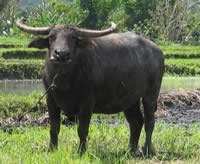 Water buffalos are domesticated Bovidae animals that are often native to Asia, Australia, Europe, Middle East, North America and South America. These animals contribute the most to our meat and dairy habits. They are breed for this particular purpose, as well as used for farming and as pack animals. Due to the massive number of breeding, these are found in abundance in many places and countries are also known as common buffalos. Water buffalo are usually around 9.8 feet long and 6.6 feet tall in size. They are descended from the wild water buffalo. Buffalos spend most of their time grazing and being submerged in water and also are found in areas that are near water resources such as streams, wetlands, forests, marshes and swamps. They can range in various colors such as black, white and brown and have curved and swept-back horns. Water buffalos require proper nutrition for reproduction and usually reproduce every alternate year. Female buffalos can only produce one offspring at one time. Water buffalos prefer to feed on grass and forbs, but also survive on leaves and certain shrubs. The lifespan of water buffalos are 25 -30 years in captivity.