Difference between Intranet and Extranet

Intranet is an internal network. It is used by companies to connect their computers on a network. Webopedia defines intranet as “a network based on TCP/IP protocols (an internet) belonging to an organization, usually a corporation, accessible only by the organization's members, employees, or others with authorization. An intranet's Web sites look and act just like any other Web sites, but the firewall surrounding an intranet fends off unauthorized access.”

The intranet is based on TCP/IP protocols, however, it is inaccessible from the outside. Only the members of the corporation with authorized access may log on and access the network and the data on the network. Like all networks, the Intranet is mainly used to share data, information, resources, company programs, software applications, as well as facilitate communication between people or work groups within the company. Intranet improves the data sharing capability and overall knowledge base of the company’s employees.

While, anyone can setup an intranet; it is mainly used by corporations as it is a secure network and is much less expensive to build and manage than private networks based on proprietary protocols. In fact, Intranets are considered to be one of the fastest-growing segments of the Internet. 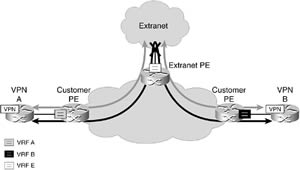 Extranet, on the other hand, is an internal network that can be accessed externally. The extranet can be thought as an extension of the company’s intranet. People from outside the company can have a limited access to the company’s internal network for business or education related purposes. The access may be granted to the organization’s partners, vendors, suppliers, current and potential customers, etc.

Webopedia defines extranet as “a buzzword that refers to an intranet that is partially accessible to authorized outsiders. Whereas an intranet resides behind a firewall and is accessible only to people who are members of the same company or organization, an extranet provides various levels of accessibility to outsiders. You can access an extranet only if you have a valid username and password, and your identity determines which parts of the extranet you can view.”

Webopedia also states that the extranets are becoming a very popular means for business partners to exchange information. However, the extranets require security and privacy, so that the information on the network is not wrongly accessed or misused by external parties. In order to protect the network, the extranets can incorporate firewall server management, the issuance and use of digital certificates or similar means of user authentication, encryption of messages, and the use of virtual private networks (VPNs) that tunnel through the public network.

SearchEnterpriseWAN lists some of the uses of the extranet: