Difference between Accept and Agree

Key Difference: Accept refers to the consent for the offering or something, whereas agree refers to possess same opinion or to grant consent.

Accept and agree seems to be related but there is a vast difference between them. There can be numerous things that we may accept without being agreeable. The difference will be clear in the following article. 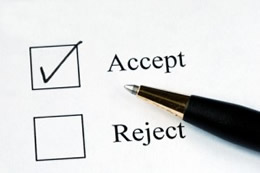 Oxford Dictionary defines accept as “consent to receive or undertake (something offered)” or “believe or come to recognize (a proposition) as valid or correct:” Thus, the word accept can be used in either context. ‘Consent to receive or undertake’, this statement means that if something is offered to someone, then he may or may not respond favorably for the offering. In case, he receives the thing being offered especially with a consent or approval, then it is regarded as accepted. For example, in the sentence: “I accept your gift”, a person is giving his consent to receive the gift.

In the other sense, accept may also refer to believe or recognize something as valid or correct. For example: “He accepts that he ruined the party”, in this sentence, the person recognizes the fact that he was responsible for ruining the party. Thus,  accept is used in context to consider or to hold as true. The word ‘accept’ can also be used for referring tolerance. For example: - “She finally accepted the bitter reality”, here the acceptance is not used in a positive sense, rather it is the unwilling acceptance that leads her to finally accept the bitter reality. The word ‘accept’ is just opposite of word ‘refuse’. Acceptance means no denial or no rejection is involved. Generally, a person accepts an offering that he considers are true, fair or right. 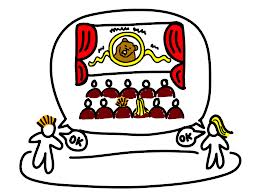 something; concur:’ it means that the opinions are matching. Let us consider an example: Two friends are discussing about the latest songs. In most of the songs, they differ in the opinions and in few songs they both like the lyrics. Then, the liking can be expressed as- “They both agree that the lyrics of few songs are nice”.

Accept and agree, both are different to each other. Acceptance may come willingly or unwillingly, as one may have to accept the things that he does not want to accept, whereas agree defines a notion of willingness and is generally used in context to possessing same opinions. The difference can be easily seen in the sentence “They accepted his sorry, but still they do not agree that it was not his fault”. The consent in the sentence is given for the sorry however, they do not agree with him, as he thinks that it was not his fault.