Difference between Apple Watch and Moto 360

Key Difference: Apple Watch is the square shaped by Apple that supports iPhone 5 and above. Moto 360 is the flagship smartwatch that features Google’s Android Wear and supports any phone that has Android version 4.3 and above. 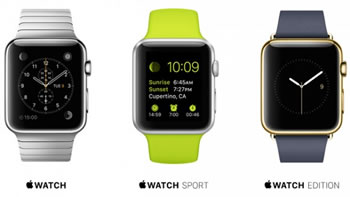 Technology is changing constantly and the recent change allows technology to shift from our hands to our wrists. There is now another way to remain constantly connected with the world. The much anticipated smartwatches have hit the market with Apple and Moto 360 being the most prominent ones.

Amid many speculations, Apple has finally unveiled its latest creation the Apple Watch. What was thought to be named as iWatch, is released by the company under the name of Apple Watch. The watch follows the direction of the older prototype watches and opts for a square look with rounded edges. The screen shows a number of built in applications by the company. However, it also performs the main function of the watch. The screen blackouts in order to save battery, but if the wrist is turns or lifted, the screen pops up and shows the time. The watch only works with the iPhone line and supports models 5 and above.

Apple has made customization and accessibility its core focus when creating the Watch. It is also able to communicate with the iPhone in order to get other information such as GPS location, etc. The phone also places importance on health and fitness and also incorporates a feature that will let the user to he/she has been sitting for a while and they should stand up. The phone comes with two Apple apps that are determined to track goals for exercise: Activity and Workout. Activity shows your progress toward daily goals for moving, exercising, and even standing. Workout is for more detailed tracking of a variety of activities, including distance, pace, time, and calories burned during each session. 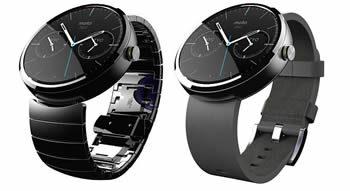 Although, other Android based smartwatches already exist, the Motorola Moto 360 is the flagship smartwatch with Android Wear that Google has unveiled in partnership with Motorola.

Even at first glace, Motorola Moto 360 stands apart from the other smartwatches in looks. The round bezel differs from the other smartwatches who opt for the standard square format. Motorola’s Moto 360 officially clocks in at 1.56 inches and has a resolution of 320 x 290. It comes with two types of bands: metal and leather. The screen is protected from scratches and bumps by Corning Gorilla Glass. The phone also allows personalized watchfaces, but from an option of 6 preinstalled ones.

Moto 360 makes navigation super easy with touchscreen and voice navigation. The watch constantly listens for ‘Ok, Google’ and starts up the moment it hears those words. The user can then directly talk to the watch and ask it look up someone, message someone and even directions. Additionally, it can also dial a person but the user will have to pick up the phone in order to talk to the person. Moto 360 also allows 3rd party applications, which results in users have multiple applications such as Facebook Messenger, Whatsapp, Pinterest, etc.

Motorola also comes built in with fitness and health applications that can measure heartrate, steps and calories. Charging also becomes easier on Moto 360 as it also charges on the universal Nexus wireless charger.

Comparison between Apple Watch and Moto 360: