Difference between Hyundai Eon and Hyundai i10

The Hyundai Eon is a hatchback entry level car by Hyundai. It was released in the market to compete small cars like Maruti Suzuki Alto and Suzuki Celerio. It was first launched in India on October 1, 2011. Later, it was launched in March and June 2012 in Philippines and Vietnam. It has recorded a good number of sales for the company. By 2014, the Hyundai Eon will be available in a new body design with facelifts and will also have 1.0 litre petrol/gasoline engine adopted from the Hyundai Santro Xing. The company claims a mileage of 26.3 kmpl; however as per ARAI ratings it delivers a mileage of 21.1 kmpl. The production of Eon is carried out at the Chennai plant in India. It has five variants in the Indian market and two in the Philippines. 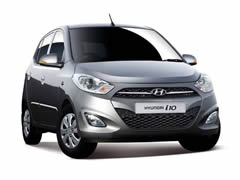 On the other hand, the Hyundai i10 is a car that has been designed as a city-utility vehicle. The idea was to design a car that can provide comfort, space, safety and good fuel efficiency. Hyundai launched it in 2007 and it has created a great dominance in many markets. It is also termed as a city car by many sources. The Hyundai i10 is a hatchback car and was launched to compete with car like Maruti Suzuki Swift in India. It has many features such as rear defogger, rear wiper, audio system with CD and USB playback, Bluetooth, electric power windows, etc. There are five variants available in India: D lite, Era, Magna, Sportz and Asta. In Europe, there is a 1.1 litre CRDi diesel engine available for i10 customers. By early 2014, the second generation of the Hyundai i10 is expected to be launched.

Comparison between Hyundai Eon and Hyundai i10: