Difference between Autoplay and Autorun

Key Difference: Autoplay examines newly discovered removable media and devices and launches an appropriate application to play or display the content. Autorun detects the autorun.if file on the media and executes the instructions according to the file.

We come across the terms ‘autoplay’ and ‘autorun’ often when dealing with computers and many people that are not so tech savvy commonly confuse the two. Though these words are similar to each other, they differ in function. They also act differently depending on the type of operating system the user is running at the moment.

Autoplay is a newer feature compared to the Autorun and was introduced in Windows XP. According to the Window’s website, the main job of Autoplay is to examine “newly discovered removable media and devices and, based on content such as pictures, music or video files, launches an appropriate application to play or display the content.” It also launches a dialog box that requires permission from the user to be able to run and with which program. Autorun was launched way back in Windows 95 and was used to make it easier to install applications. When a user popped a CD in the system which had an autorun.inf file in the root directory, Windows would automatically detect the CD and would start running and downloading the application. This is most common with the system CDs. 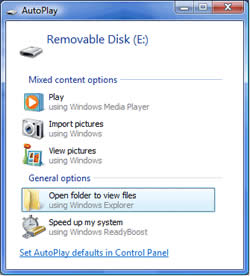 The Autorun feature made it easy for the non-techies to install a file by just placing a CD in the CD tray; however this also lowers the security of the computers. For example: if a CD is booted into the system has a virus as well as an autorun file, the system will go ahead and run the file and load the virus on the system. In case of Autoplay, it would ask the user permission to load one or more files from the CD. Autoplay was more developed for music, video and picture files. This system comes with a system of handlers that can deal with playing or display that type of media.