Difference between Art and Craft

Key Difference: Art requires skill to create works that have a more aesthetic and decorative purpose. Crafts are objects that have an aesthetic purpose as well as a functional purpose.

Arts and crafts are terms that are almost always used synonymously in today’s world. The lines between the two words have been significantly blurred to the point where both are interchangeable. Arts and crafts combined include creative activities that require skill and an imagination. Crafts are considered as type of art, while art encompasses anything that has to with creative and artistic activities. However, if one looks at the strict definition of both art and craft, they differ from each other in the traditional sense. 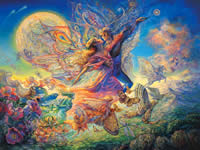 Art is a term that is used to refer to a diverse range of activities that require artistic abilities, imagination and unique perspective. This requires an artist to look at the world in a different way from other people. Any person that has the ability, skill and vision can be called an artist. Though in the ancient times, the word artist was limited to visual arts such as paintings, sculpting, printmaking and photography, these days the word arts have been expanded to include graffiti, cooking, designing, sewing, acting, dancing and almost everything. Until the 17th century, art referred to, “any skill or mastery and was not differentiated from crafts or sciences.” Art is usually noted as decorative art, which only serves an aesthetic purpose not a utilitarian purpose.

However, the definition of what art is blurs when it comes to architecture as it falls in visual arts, but serves a purpose and is useful. Art requires a person to be creative, imaginative, expressive and show technical skill. A piece of art is expected stimulate a person’s feelings and is free for individual interpretation depending upon the person. The word art is used to refer to many things including a study of creative skill, a process of using the creative skill, a product of the creative skill, or the audience's experience with the creative skill. The definition of art is under constant debate and is constantly changing to adapt to the new forms of art that are rising. Another type of art in addition to visual arts is creative arts which includes decorative arts, plastic arts, performing arts, or literature.

Craft is a profession that requires skilled work. According to the definition set by institutions, craft should serve two purposes: decorative as well as functional. Historically, this term was used to refer to people that part-take in a small-scale production of goods that could be used for functional purposes. Craftsmen were those people would make objects using straw or would weave clothing or rugs. These people would form a guild and travel from towns to cities in order to sell their goods for a profit. Craft includes objects such as ceramic pottery, glass, fiber, metal works and jewelry as they serve both an aesthetic purpose as well as functional purpose.

Crafting required a higher level of education in the particular craft, with the business being passed down generation to generation in families. In order to become a craftsman, a person would require to first go through extensive study of the material and then complete an internship under a craftsman with a similar trade, following which he could then become a part of the guild and be able to sell or exchange goods or he could travel by himself and create his own shop. Craft is described as being something between an art (which relies on talent and skill) and a science (which relies on knowledge). The definition of craft also changes depending on new and upcoming skills. The definition of craft has also been expanded to include graphic and package