Key Difference: SWIFT stands for Society for Worldwide Inter-bank Financial Telecommunication. SWIFT code is used as a bank identifier in case of international transactions. SWIFT code is a code that is assigned to any institution that acts as the institution’s identity in the foreign market.  ABA stands for American Banker Association. ABA code is used to identify specific financial institutions within the United States.

Swift Code and ABA Number both acts as blueprint of the banks. Some people may have heard about one or both. People tend to think that they are same as they are uniquely identifying a bank. However, there are differences among them and let us find out what are these differences.

SWIFT code is a short for an even longer acronym known as SWIFT/BIC - Society for Worldwide Inter-bank Financial Telecommunication/ Bank Identifier Code. This code was established in 1973 in Brussels as an identifier code. This code is assigned to both financial and non-financial institutions. When assigned to a business, it may also be known as a BEI or Business Entity Identifier.

The purpose of this code is to allow easy transference of money between banks, specifically from one country to another. In addition to money, the banks also communicate with each other using this code and it can sometimes be found on bank statements.

ABA stands for American Banker Association. Thus, ABA number was introduced by ABA in 1910. The financial institutions of America have been assigned this 9 digit number. 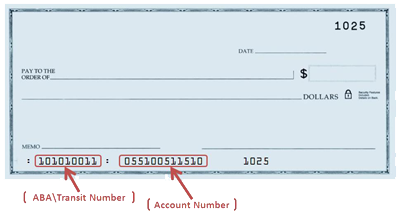 One can easily find this number on the bottom of checks or in some other financial institution.

Format of ABA number of a financial institution:-

This number is generally found on the bottom of negotiable instruments such as checks that identifies which financial institution it is drawn upon. They are sometimes called as Bank Transit Routing numbers. It helps in routing of payments across banks.

Swift code is used in international transactions, whereas ABA number is used for domestic inter banking in America. The format of both is quite different from each other. Swift is alphanumeric code whereas ABA number contains all digits.