Difference between Archaeology and Paleontology 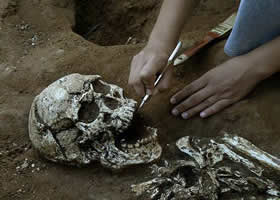 Archaeology deals with the study of human past and present, through the materials, which humans left behind. The materials that humans used, made, or modified are studied by archaeologists. They analyze skeletal remains and artifacts, such as tools, pottery, cave paintings, and ruins of buildings. The term is derived from the Greek word archaiologia, where archaio means “ancient” and logos means “science” and “study”. The science is archaeology, which deals with the study of ancient times. It provides an insight of the ancient times by analyzing the remained materials belonging to that time. It aims to preserve the history for present and future learning.

Paleontology deals with the study about fossils or evidence for formerly living animals and plants. It also includes all life, from bacteria to dinosaurs. The term is derived from the Greek word palaios, means “old”, “ancient” and logos means “speech”, “thought” and “study”. It is a mixture of biology and geology, but differs from archaeology because it excludes the study of morphological modern humans.

Comparison between Archaeology and Paleontology: