Difference between Base Jumping and Bungee Jumping 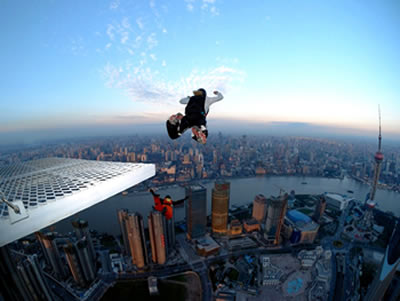 In 1978, filmmaker Carl Boenish filmed the first BASE jumps, which included the ram-air parachutes and the freefall tracking technique, and introduced the modern form of Base Jumping. He was the first one to coin the term "B.A.S.E." in base jumping. The term stands for the four categories of fixed objects from which an individual can jump, it comprises of Buildings, Antennas, Spans (Bridges) and Earth.

Base Jumping is a different type of aerial sport. It is also written as B.A.S.E. jumping. The jumper jumps from a fixed objects and uses a parachute to break their fall. It is basically a parachuting jump performed from a fixed object like towers or large cliffs. It is also found that, the Jumpers leap out from a moving airplane at a height of 15,000 feet and freefall over 100 mph. It has contributed to a new level of reward and risk. Normally, the jumpers jump off from a cliff or from man-made objects situated on lower altitudes. This makes it easy for them to deploy the parachute and avoid any malfunctions or problems. A jump from 500 feet (152 m) is about 5.6 seconds to the ground if the chute does not open. It is illegal to perform base jumping in some places. The common base jumps occur at altitudes of less than 2,000 feet (610 m), but usually not less than 200 feet (61 m). The jumper is supposed to take care of the ‘safety margins’, which typically include those jumps that are taken from the higher altitudes with the help of an airplane. The parachute in this system has to be opened quickly at the time of lower airspeeds. The shorter jumps here are to be achieved in less time.

The bad jumps in base jumping result in loss of control over the jump. One of the most serious complications arises when the chute opens backwards, this is called as an ‘off heading’ opening in base jumping and is a leading cause of serious injuries and deaths among the people who participate in this sport. 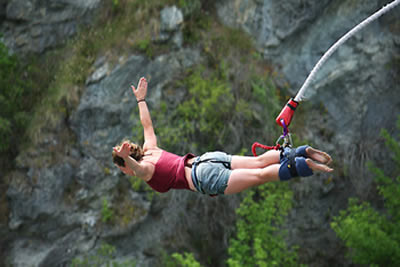 In 1979, the first modern bungee jump was introduced by the members of the Oxford University Dangerous Sports Club from a 250-foot (76 m) Clifton Suspension Bridge in Bristol. Bungee Jumping is also spelt as “Bungy” jumping. It is a sport of leaping off tall structures when connected to a thick rubber band.

Bungee jumping is an extreme sport, which is full of thrill and excitement. The individuals or people jump from the higher grounds, such as a bridge. They have a rope tied around them to stop them from hitting the ground. The tall structure are fixed objects, such as buildings, cranes and movable objects, such as a hot-air-balloon or helicopter, which have the ability to hover above the ground. The thrill here comes from the free-fall and rebound. In bungee jumping, the equipment and their proper usage are of utmost importance. The equipment like the professional quality bungee cords, harnesses, carabineers and shackles are highly specialized in nature, and hence they are supposed to be purchased from a renowned and trusted place. In bungee jumping the concept of kinetic energy is involved. As the person jumps, the cord stretches and the jumper is pulled backward. The cord when recoils again continues to oscillate up and down until all the kinetic energy is dissipated.

In bungee jumping, the injuries caused in can be categorized as: the injury occurred after the secondary jump, equipment mishap tragic accident, and those which occur due to the carelessness of the safety measures. At the first instance, the injury occurs due to harness failure, miscalculation of the cord elasticity and the improper connection of the cord at the time of jump. Injuries that occur despite of the safety measures, generally relate to the abrupt rise in upper body intravascular pressure during the bungee cord recoil. Eyesight damage is the most frequently reported complication in Bungee Jumping. It is one of the most dangerous types of sport.

Comparison between Base Jumping and Bungee Jumping: