Difference between Biryani and Pulao

Key Difference: The primary difference between Biryani and Pulao is that pulao is a one pot dish in which all of the ingredients are mixed together and cooked in one pot, while biryani is cooked by layering par-boiled rice with other par-cooked ingredients. 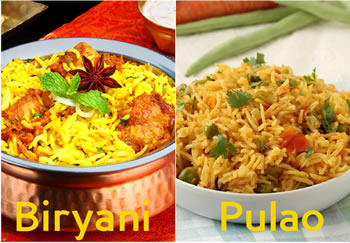 Biryani and Pulao are two different types of food dishes. Both are quite popular in South Asia and are now famous around the world as being part of the South Asian Cuisine. However, the two are quite similar in nature, which is why it can be quite confusing to tell them apart. In fact, many people actually incorrectly believe that they are the same thing, and that the names are just a regional difference. In reality, the two are completely different dishes.

Both are made from rice, and is flavored with a variety of spices, which also adds to their confusion. However, the manner in which the two dishes are prepared is what differenciates between them.

Firstly, Biryani originated primarily on the Indian Subcontinent among the Muslim population. It has since garnered quite a reputation and a dedicated following. Pulao, on the other hand, has various origins. There are many different types of pulao and nearly every region has its own variation on it. The pulao is most popular in Central Asia, Middle East, South Asia, and East Africa.

While both dishes are made primarily with rice, spices, and meat and/or vegetables, the biryani uses a layered method of cooking, whereas pulao is more of a one pot dish. In order to cook pulao, presoaked rice is cooked in one pot with meat and/or vegetables of choice, spices, and with broth of choice. All of these are mixed in one pot, which is then covered and left to cook. Once all the ingredients are cooked, the pulao is ready. It can be eaten as it or with sometimes accompanied with onion, lemon and raita. However, it is also commonly served as an accompaniment to other dishes such as dals and gravies. This is primary because pulaos are mildly spiced and hence can be pair with other flavors.

Whereas, cooking biryani is more of an intricate task. There are two primary ways to cook biryani; one is kacchi biryani, i.e. raw biryani, and the other is the more common regular method using cooked or par-cooked ingredients. In the raw biryani method, the rice is first par-boiled, while the meat or chicken is marinated with yogurt and spices. These two are then layered in a pot alternating with rice and the marinade, which is then sealed and placed on low heat to simmer and cook.

The other more common method, also requires one to parboil the rice, while the other ingredients, whether that is meat, chicken, or vegetables is sautéed with the other spices and in a base of onion and ginger garlic paste. The sauce here can have many variations depending upon the region and person preference. The ingredients vary as well. Once the meat, chicken, or vegetables are almost cooked, they are taken off the heat. Now a pot is layered with the par-boiled rice and then with meat and spices. Often another layer of fried onions may be added. The pot is then sealed and put on low to medium low heat to finish cooking. Once it is finished cooking, the biryani is taken off the heat and served as is, and is often accompanied with onion, lemon and raita. 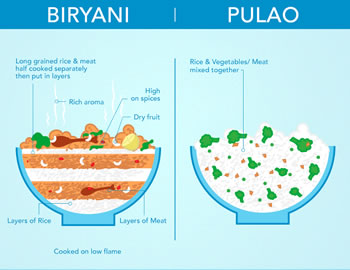 As it can be seen, there are vast differences between Biryani and Pulao. For starters, pulao is cooked using all raw ingredients, whereas biryani is cooked using par-boiled rice, while the other ingredients can be raw or more commonly are also par-cooked.

Secondly, while pulao is that pulao involve mixing all of the ingredients in one pot and cooking them together, whereas biryani requires one to par-cook all the ingredients separately, and then layer them in a pot and then cook them.

Another difference between them is that biryani is intended to be a single dish, which is either as is, or is sometimes accompanied with onion, lemon and raita. Pulao, on the other hand, can be eaten as is or accompanied with onion, lemon and raita; however, it is also commonly also paired with other dishes such as dals and gravies, especially the milder ones.

Comparison between Biryani and Pulao: