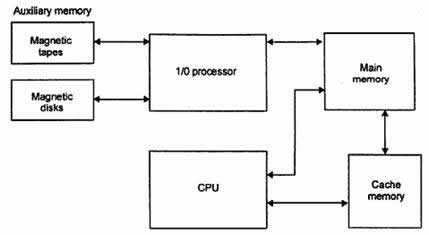 Cache Memory is a small and high speed access area. It is used to store frequently accessed data. Whenever it is required, this data is made available to the central processing unit at a rapid rate. Cache memory can be accessed at a very fast rate than in comparison to normal main memory. This memory often resides in the CPU. It has been devised to match the speed of the processor; it is Static-RAM, SRAM. These SRAM are faster and expensive than DRAM. 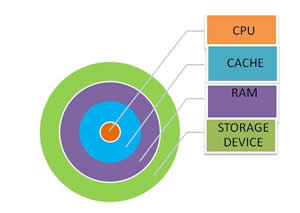 Main memory is also known as Random Access Memory (RAM). It is a memory unit that directly interacts with the central processing unit (CPU). It is a volatile source of data. It can be described as a large array comprising of words or bytes. RAM is connected with the processor by its address and data buses. These buses are composed of electrical circuits or bits. Main memory is actually built from DRAM chips or Dynamic RAM. They are known for their compact size and capability for a faster access. It is important to mention that the computer can only manipulate data that is present in the main memory. A typical “module” of desktop memory is long and thin in appearance. It is installed in the memory module slots present on the motherboard. Modern memory modules come in various capacities like 256MB, 512MB, 1GB, 2GB, 4GB, and 8GB sizes; main memory has a limited capacity.

Full table is not been able to see