Difference between CCD and CMOS Sensor 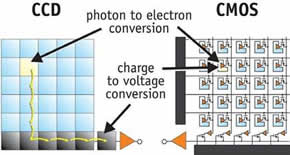 CCD and CMOS sensors are basically used for creation of images in digital cameras. They work by converting light into the electronic signals. They both differ in many aspects. CCD sensors undergo a special process of manufacturing. Due to this process, conversion takes place in the chip and that too without distortion. Due to this special technology used in their manufacturing process, they are expensive as compared to their counterparts. They are known for creating high quality images with low noise factor. In these chips, the pixels get recorded on the chip and then the pixels are sent one by one for the creation of an image. This takes some time, and thus this chip uses a lot of energy.

On the other hand, CMOS chips make use of transistors at each pixel and charge moves though the traditional wires. Each pixel gets an individual treatment. This technology got introduced after the CCD sensors. They are less expensive than the CCD sensors. These sensors may be considered inferior to CCD sensors in terms of image quality and resolution. However, they are better in power consumption and provides longer battery life than CCD sensors. Unlike CCD chips, CMOS chips have an inbuilt circuitry for reading the pixels at the photo sensor level. Due to this feature, all the data gets transmitted at once, and thus less energy is consumed.

Both sensors capture each image by using different types of shutters. A CCD sensor uses a global shutter which captures all light at nearly the same time. On the other hand, CMOS sensors make use of a rolling shutter which exposes the frame from top to bottom. Based on this difference, CMOS sensors can create some issues while using flash. Vertical smear can occur in CCD, whereas this is not an issue with CMOS sensors.