Difference between Chips and Waffers

Key Difference: A chip refers to a popular snack that is generally prepared by thin slices of potato. A waffer or wafer is generally used to refer a sweet biscuit with characteristics like light, crisp, flat and thin. Sometimes, a light and thin chip is also referred as a wafer. 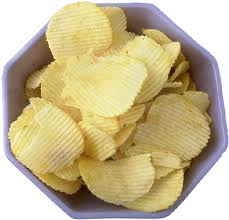 Chips and wafers, these mouthwatering snacks are widely popular. They are very famous especially among the children. The confusion between them is due to the different names that are used in countries to refer them. In few places, a chip is also known as wafer, and thus it is very difficult to find the difference. The reason behind the confusion arises due to the general meaning of wafer. A wafer as a word is used to refer a thin piece of something. Hence, the chips also are sometimes known as wafers.

Chips seem to be synonymous with potato chips, especially in the U.K. However chips can be made from a variety of things.  Potato is widely consumed as food all over the world and thus Potato chips are also preferred as snacks. The process of making potato chips involves the rapid dehydration of potato slices by frying them in hot oil. They can also be baked. Its crispiness and special palatability makes it a popular snack. There are different varieties of potatoes used for chips. The variety is offered by adding different types of spices and flavors. Chips are generally associated with salty favour but chips may also be sweetened, pungent or favoured in some other variety. Potato chips are an important part of the snack food market of western countries.

Wikipedia states that, “According to a traditional story, the original potato chip recipe was created in Saratoga Springs, New York”. However, there are numerous versions of the story of invention of chips. Chips are also made from corn, chocolate, banana, etc.

Waffer or wafer refers to a thin, flat, dry, sweet biscuit that is generally used for 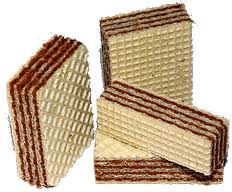 decorating ice creams. Wafers generally possess waffle surface pattern. Wafers continued to be an important element of the dessert course in later centuries. Today we associate wafer cornets with the ice creams. The ice-cream is poured in wafer cornet and is extensively popular. Ingredients of sweet wafers generally include eggs, flour and sugar. The other ingredients can also be added according to the taste required. The dough or mixture is generally sliced into fine slices and then these slices are baked. The wafers can be made in various flavors like vanilla, strawberry, etc., depending upon the choice. As the wafers are crisp, they are also used in various recipes.

Thus there is no set difference between them, but on the basis of usage of the words in the modern world of today, we refer chips as a salty snack whereas wafer is mostly used in context to a sweet, thin, light biscuit. However, chips can also be known as wafers.