Difference Between Concept and Theme

Key Difference: The main difference between Concept and Theme is that, a concept about a story or a film or an event or anything is sometimes unique and differently expressed and executed than the usual ways, whereas a Theme is not unique and is mostly a generalized category like for example, there are countless romantic (theme) stories, but limited historical-romance (concept) stories will be seen. Thus, a concept is a limited to a particular idea while theme is broader. This is the reason that inter-linked together where-in you can have multiple concepts under one single theme.

​​Concept is a noun, which is defined as a general notion or an idea that is mentally formed, combining all the characteristic or particular things. The origin of the word is from Medieval Latin Conceptum, which means something 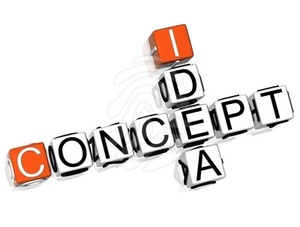 ​received or conceived from Concipere meaning to take in. Concept in advertising is defined as a brief clear narration of the main idea around which a marketing or an ad campaign is organised. Concept in various categories is defined differently according like for example concept for a story is the main idea of the story or a plan. Concept is where the story originates and eventually it ends the narrative. It is said to be an overall idea, around which a theme revolves wherein a concept becomes the base of the design depicting the core idea.

The definitions of concept may vary field to field as concept exist is all fields of study and it can be simply understood as an abstract idea, each unique in it's own way of execution or imagination. A concept helps in presentation of ideas in a better way with more detailed description to how a particular theme will stand out than others existing with similar themes but difference in concept story. A concept is understanding of retained in the mind through experiences, imagination or reasoning. Concepts are used in study material or for researching like for example, we study Nuclear Family and Extended or Joint family in Sociology as a subject to understand the different phenomena that is observed in the society. Concepts like these are visible but sometimes there are concepts which are abstract in nature like for example ideologies or beliefs.

The word Theme is also a noun and is understood as the main subject to be studied, written or discussed about in a piece of writing or a movie, story etc. Theme is defined as a particular subject or an issue that is discussed repeatedly or often by the Merriam-Webster. It's an idea which is expanded and discussed and the origin of the word of Theme comes from Latin word Thema, from Greek: deposit from Tithenai to lay down. In a novel or a story a theme reflects the character's main journey internally through the outer plot. A theme is seen as a n important part in the story to connect with the audience like for example, how the story 'The Hunger Games' written by the American author Suzanne Collins represents Katniss' incentive to fight her way through in the story or as it depicted in the movie.

A theme in a story gives meaning to the whole plot and addressing the reader or the audience in a much easier way. It connects with the concept and presents the idea as a whole pitch rather than individual idea. Theme are generalized subjects or an opinion expressed on the main subject like for example, if a subject is war then the theme can be, 'Futility of War' or anything of the writer or author's personal views regarding a particular subject. In literary works, a theme is an underlying meaning with significance to the work presented with the whole story revolving around it for example, Love and Friendship, Retro theme, War, Revenge or Crime-Thriller or Suspense themes. A theme's main function in the story is bringing together all the essential elements of the narrative, exhibiting a universally accepted view, which stands true in regards for people of all cultures. It also provides an insight about certain things to the reader. Themes are visible and sometimes in research-based work, a particular theme is used in each chapter to explain that particular idea with specific findings related to it and under each theme there could be a distinguishing concept like for example, Language as a subject is chosen with different themes like , the role of education, cultural practice etc with distinguishing concepts like, a role of a group or an organization, etc. These examples do highlight a difference between a theme and a concept, even though sometimes they are linked together.

Comparison between Concept and Theme: