Difference between Credentials and Certifications

Key Difference: Certifications primarily refer to certificates, which are a document that prove that you are capable of a skill or of doing a certain task. The term credentials, on the other hand, can refer to practically anything. Basically, a credential is an attestation of an individual’s identity by a third party.

The two words are quite confusing, not only because they sound similar, but also primarily due to the fact that they are often used to refer to the same thing. Both the terms refer to something that can be used to attest to or prove the qualification level of a person. However, the two words are not exactly synonymous. In fact, the two have subtle differences between their meanings.

Technically speaking, the term credential is an envelope term that can be used to cover other terms such as licensure, certification, accreditation, and certificates. Whereas, it can be said that certification is a term that refers to a specific type of qualification level.

Certifications primarily refer to certificates, which are a document that prove that you are capable of a skill or of doing a certain task. Usually, a person needs to go through a course or take a test of some kind proving that they can do the skill or task in question, as well as prove how well they can do it. They are then provided with a certificate, which they can use to prove to another person that they can.

This course or test is usually a reputed school or company, with a standard that can everyone knows of.  Hence, one can’t just write someone else a certificate; it would have no value. The more famous or difficult the course or school is, the more weightage their certifications have. For example: If someone has an Engineering Degree from MIT, or someone else who has an Associate Degree from a Trade School, who is more likely to be hired first? Yup, the MIT graduate.

The term credentials, on the other hand, can refer to practically anything. Basically, a credential is an attestation of an individual’s identity by a third party. According to Wikipedia, “examples of credentials include academic diplomas, academic degrees, certifications, security clearances, identification documents, badges, passwords, user names, keys, powers of attorney, and so on.” 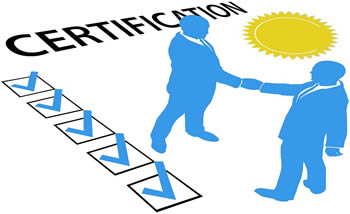 Basically, credentials are anything that can be used to prove a fact, such as someone is who they say they are, or that that do what they say. For example: An id card can be a credential, since it can be used to prove someone’s name, address, etc. However, they can’t be used as a certification because it says nothing about whether or not that person is qualified for something.

However, there are things that can be used for both certifications and credentials. For example, a driving license, it proves the person’s name and address, etc., while it also shows that the person passed a qualification to prove that they can drive.

Comparison between Credentials and Certifications: