Difference between Diabetes and Hypoglycemia 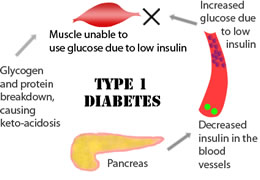 Diabetes is a disease that is caused due to the inability of the body to convert glucose into energy. Food consumed by us gets converted into fats, proteins or carbohydrates. In the process of digestion, carbohydrates are converted into glucose. This glucose is consumed by the blood cells in order to generate energy. For this transformation, the hormone named as insulin is required. This hormone is produced by the pancreas. Diabetes occurs due to insufficient quantities of insulin.

1. Type 1 Diabetes: Cells producing insulin get destroyed. This may occur due to some virus or some kind of reaction. It is treated by daily insulin injections and a healthy diet. Physical regular activity is also suggested.

2.  Type 2 Diabetes: Lack of sufficient insulin can lead to this type of Diabetes. It means that insulin is produced but not in sufficient amount. The insulin that is produced, also does not work many times in a proper way. Physical inactivity and obesity can be related with this kind of Diabetes.

Symptoms for type 1 usually occur rapidly than with type 2. Thus, Type 2 is sometimes not noticed in its initial stage.  Severe Diabetes can also lead to serious complications and even premature death. 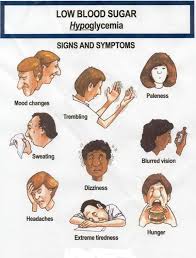 The conditions that can cause Hypoglycemia may be associated with the:-

3. Diseases that affect the pancreas, liver, kidneys, adrenal glands, or other organs.

It can also occur in an elder person with Diabetes if he misses a meal or snack.

Severe Hypoglycemia could cause seizures. It could even cause coma or death.