Difference between Petrol and LPG

Key Difference: Petrol, also known as Gasoline, is a transparent fuel derived from crude oil and is used as fuel in internal combustion engines. Petrol is separated from crude oil from 40°C to 205°C. Liquefied Petroleum Gas (LPG) is a flammable mixture of hydrocarbon gases that is used for heating in cooking appliance and as a fuel in vehicles. LPG is also known as LPG, GPL, LP Gas, liquid petroleum gas or propane or butane. 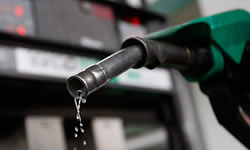 The process of creating includes drilling for crude oil. The oil drilled from the ground is then sent to a refiner. At the refinery, heat is used to separate out different products at boiling points. The oil is then sent through a distillation process where it is applied with heat and pressure causing a chemical reaction. The application of heat and pressure determines if the product becomes petrol or diesel. Following distillation, the fuel is blended with additives that help improve the quality of the fuel. The crude oil is composed of various hydrocarbons that differ in composition. These different hydrocarbons are what make the different products that are derived from the oil. Simple hydrocarbons such as CH4, C2H6, C3H8, and C4H10 are light gases and are used in solvents for paints. The other longer chains of hydrocarbons are used to create fuel.

Petrol produces approximately 2.3 kg of CO2 per kg of petrol burned. It has a calorific value of 45.8 MJ/kg and a boiling range between 40°C to 205°C. Petrol’s energy by volume amounts to 33.7 MJ/liter and its density ranges between 0.71–0.77 kg/l (6.073 lb/US gal). Petrol is one of the most common sources of fuel that are used for cars worldwide, but with the emissions and price of oil on a constant rise; many people are turning to other means of ‘clean and green’ fuels that are available on the market. 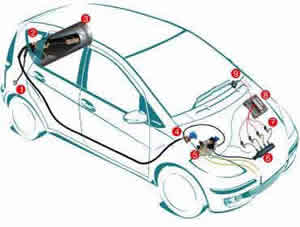 Liquefied Petroleum Gas (LPG) is a flammable mixture of hydrocarbon gases that is used for heating in cooking appliance and as a fuel in vehicles. LPG is also known as LPG, GPL, LP Gas, liquid petroleum gas or propane or butane. In the United States, LPG used in cars is also referred to as Autogas. LPG is prepared by refining petroleum or ‘wet’ natural gas and is almost entirely derived from fossil fuel sources. LPG can also be extracted from natural gas streams that emerge from the ground. LPG was first produced by Dr. Walter Snelling in 1910. LGP is an odorless gas when evaporated and hence is blended with ethanethiol (a powerful odorant), allowing users to detect leakages. LPG is popular as it is a clean fuel and does emits very little sulfur emissions. As it is also a gas it does not pose any threat to water or ground, but it can cause air pollution.

LPG has a specific calorific value of 46.1 MJ/kg and has an energy density per volume unit of 26 MJ/L. LPG evaporates quite fast as its boiling point is below room temperature making it hard to contain. The gas is usually contained in pressurized steel units. The pressure at which LPG becomes liquid (known as vapor pressure) varies depending on the composition and temperature; for example: pure butane at 20 °C (68 °F) has a vapor pressure of approximately 220 kilopascals (32 psi), while pure propane at 55 °C (131 °F) has a vapor pressure of approximately 2.2 megapascals (320 psi). LPG is highly flammable and will combust if it comes into contact with air and a ignition source. In addition to being used as a fuel in vehicles, LPG is also used as fuel in stoves and other heating appliances. Many companies are also replacing ozone-harming refrigerants in refrigerators and ACs with LPG as a cleaner source.

With many people shifting focus on the rising global warming and prices; many people have shifted from using petrol/gas to LPG, diesel and other cleaner forms of fuel. Petrol is still the popular form of fuel. LPG is available is as an add-on to the petrol fuel. The car would have to be able to support either diesel or petrol in addition to LPG. LGP or autogas requires the car start on the regular fuel before it is shifted to LPG. LPG is cheaper compared to petrol and diesel and also provides has a better fuel economy. Many companies have introduced cars with LPG set-up but people can also purchase a car and get LPG as an external add-on. There are many DIY kits available for people would like to do it themselves.