Difference between Dual and Duel

Key Difference: Dual means anything that has two parts or two meanings or two applications. Whereas a duel is a fight between two people using swords or guns. As you can see, the two words have very different meanings. Hence, using these words interchangeably can be very confusing and misleading. There are times in the English Language, when there are some words and look and sound alike, such as Dual and Duel. These words are known as homophones. They look and sound alike, but have two completely different meanings, which can be really confusing for non-native English speakers, and even for a number of native speakers.

According to the Oxford Dictionaries, Dual means “Consisting of two parts, elements, or aspects,” whereas duel means “A contest with deadly weapons arranged between two people in order to settle a point of honour.”

As you can see, the two words have very different meanings. Hence, using these words interchangeably can be very confusing and misleading, and sometimes, even hilarious, though unintentional.

Dual means anything that has two parts or two meanings or two applications. Whereas a duel is a fight between two people using swords or guns. A duel is most commonly fought about honor, such as when one person insults another, and then the other person demands a duel to recover his honor and to make the other person pay for the insult. Duels were often deadly, as they fought them with swords or pistols, and people did commonly die. However, in today’s sense, duels need not have violence. People can duel with words, or just silently as well, such as to fight for a job or post. The usage of duel is similar to ‘fight’, but only between 2 people. If 3 or more people are fighting, then it is better to say fight or some other word then duel. 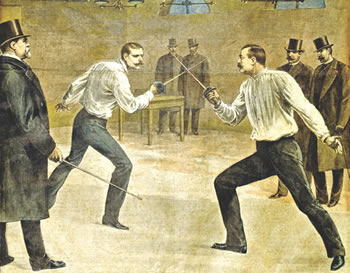 Another difference between the two, which can be helpful in identifying where to use which one, is the fact that ‘dual’ is primarily used as an adjective, i.e. to describe something. For example: dual-language texts in English and French. This indicates that the text is in two languages, English and French. The word ‘dual’ is being used to describe an attribute of the texts. Duel, on the other hand, is used as a noun or sometimes as a verb. For example, people can have a duel or they can be dueling. In this case, the word ‘duel’ is used to describe something that the people are doing, but not the people themselves.

This can be used as a tip when trying to figure out which word fits where. If the word is being used, or needs to be used to describe something, then it will most probably be ‘dual’. Alternately, if the word used to needed to be used describes what people are doing, i.e. fighting, then the word here would more definitely be ‘duel’.

Comparison between Dual and Duel: