Difference between Earthworm, Tapeworm and Roundworm

Earthworms, Tapeworms and Roundworms are natural worms existing in different habitats and places. Accordingly, an earthworm is a round and cylindrical shaped worm, which survives under ground in the soil. Tapeworms and roundworms are parasitic worms, which are known to cause infections in animal bodies (including humans).  The mentioned worms possess different characteristics and accordingly belong to different types of phyla. 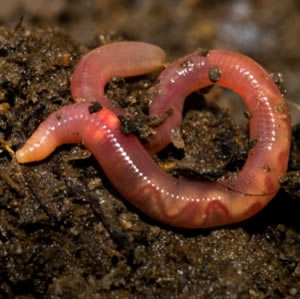 Earthworms belong to Class Clitellata of the phylum Annelida, and fall under the sub class Oligochaeta. They are the largest members of the Oligochaeta family. Commonly they are white, dark-red or red-violet in color, and have a segmented and cylindrical body with cavity. The setae or bristles help them in their locomotion and movement. These are largely found during the monsoon in marshy and wet lands. They are known as burrowing worms, which carry out soil aeration. These survive on the dead and decaying animals, from which they get the essential nutrients for living. 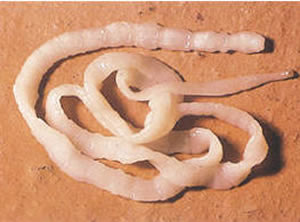 Tapeworms belong to Class Cestoda, of the phylum Platyhelminthes. They belong to families of Caryophyllaeidae, Balanotaeniidae, Lytocestidae, Capingentidae, etc. Generally, these are common names given to Class Cestodea. These are parasitic flatworms, which have elongated shapes. They survive on other large living creatures (the hosts) for nutrients and food. Generally, they are found in the intestines of the vertebrates (often humans), resulting into symptoms like weakness and loss of weight. These worms lack the ‘guts’ hence, they absorb the material directly through the skin of animals. 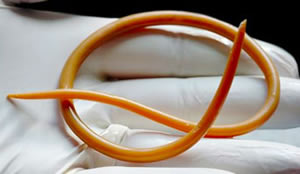 Roundworms belong to class Secernentea of the phylum Nematoda. They are commonly classifieds as Nematodes. They comprise of vast range of animals, and are largely found in the environment. These are obligate aquatic organisms, consisting of a cylindrical unsegmented body structure. Like the Tapeworms, even these are parasites, which are found in the intestines and body organelles of huge living animals. They are also known as ‘ascaris’ worms. ‘Ascariasis’ is the most common infection caused by roundworms. They survive on the human material in which they live. Also, they have the tendency to enter into the body by entering through the skin.

The above mentioned worms belong to the kingdom ‘Animalia’. They are invertebrates which cause changes in the environment; some help to enhance and increase the quality of environment like the earthworms, which are essential for soil fertility, while the others such as the tapeworms and roundworms are infectious in nature as they enter into the intestinal parts and cause damages in the animals and other living organisms. The roundworms are transferred into the human body through the soil, whereas tapeworms are transferred from the undercooked food. As they all belong to different phyla, they all play a different role in nature and manage their part of the share accordingly.

Comparison between Earthworm, Tapeworm and Roundworm: