Key Difference: Both originated in Africa, and are carried by host animals. The Ebola virus directly attack any and all cell that it come in to contact with, whereas the HIV virus does not attack any cell, but instead disables the immune system allowing other infections to take root. 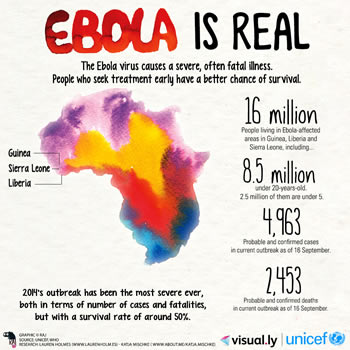 While cases of Ebola have been documented for as long back as 1976, its outbreak has been limited. Its first outbreak was in 1976 in Sudan and Democratic Republic of the Congo. Following sporadic outbreaks, its biggest outbreak to date occurred in 2014 in West Africa. After this outbreak and the widespread panic that it created, Ebola was compared to the HIV virus by many people.
First and foremost, both are viruses, and both originated in Africa, but went on to spread internationally. However, Ebola is fairly isolated, as compared to HIV and the number of cases affected by Ebola is much less than HIV. As of 2012, approximately 35.3 million people are living with HIV globally, whereas Ebola had 1,716 cases in 24 outbreaks until 2013. The 2014 West Africa epidemic had 13,567 reported cases of Ebola up until 29 October 2014, resulting in 4,960 deaths.
Both are carried by host animals, fruit bats in the case of Ebola and non-human primates in the case of HIV. They were then transmitted to humans, and both may have made that transition when hunters ate bush meat. Additionally, neither Ebola nor HIV has a vaccine or cure. The best is that you can treat the symptoms of the diseases, but both are deadly if left untreated.
Furthermore, both are spread through the exchange of bodily fluids, such as blood, semen, breast milk, etc. However, Ebola can also be spread through urine, saliva, sweat, feces, and vomit, making it faster and easier to spread than HIV. Although these fluids must come into contact with broken skin or mucous membranes, such as the eyes, nose, or mouth, in order to infect another person. 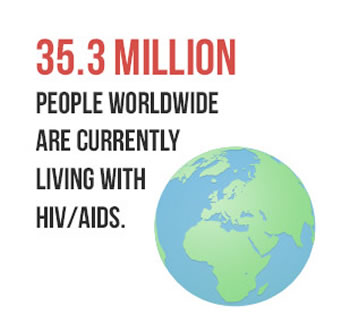 Moreover, HIV has a longer latency period than Ebola. A person infected with HIV may not show any symptoms at all for up to 10 years, but still be able to infect others. Whereas a person infected with Ebola will likely show symptoms between 6 and 21 days, and the symptoms must be present in order for the person to transmit the virus. Also, while it possible to live a long and fairly healthy life with HIV, Ebola is know to kill between 25% and 90% of its victims.
The Ebola virus and the HIV virus also differ in the manner that they attack the patient. The Ebola virus directly attack any and all cell that it come in to contact with, whereas the HIV virus does not attack any cell, but instead disables the immune system allowing other infections to take root.
Furthermore, the HIV virus is very apt at mutating. A patient who dies from AIDS may have multiple strains of the same virus, whereas, the Ebola virus does not mutated very easily. In fact, the strains of the virus which were isolated in the 1976 Bumba outbreaks and the 1995 Kikwit outbreaks are very similar in structure even though they were separated by 19 years and 1,800 kilometers.
Comparison between Ebola virus and HIV Virus: