Difference between Pig and Pork

Key Difference: A pig is an animal belonging to genus Sus and from family of even toed ungulates of Suidae, whereas the meat obtained from pig is known as pork.

Pig and pork are related to each other. The non-vegetarians can easily relate them, as the flesh of pig in the form of meat is known as pork and pork is a very famous meat. 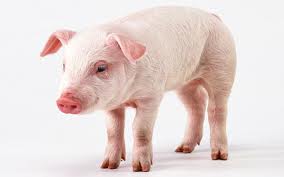 A pig is a large even-toed ungulate; pigs have four toes on each hoof, but they use only two toes on each foot for walking. The wild boars are considered to be their ancestors. The scientific name of domestic pig is Sus scrofa domesticus. Pigs are generally herbivorous but the domestic pigs can be omnivorous. These pigs are farmed in order to consume their flesh. The flesh obtained by the pigs is known as the pork. Domestic pigs like pot bellied pigs are also kept as pets. Pigs may have been domesticated as early as 10,000 B.C. Pigs specially the wild ones are good runners, swimmers and strong fighters. Pigs are found in many regions except Antarctica. Wild pigs prefer moist forests, swamps and scrublands. 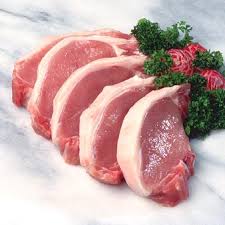 The word pork has been derived from Old French 'porc' meaning "pig, swine, boar," and directly from Latin word 'porcus'  meaning "pig, tame swine," Pork is the culinary name that has been given to the meat obtained from the flesh of domestic pig. Pork is very popular among the meat-eaters. It is freshly cooked as well as preserved in forms of hams, smoked pork, gammon, bacon, etc. Meat of cow is known as beef similarly meat of pig is known as pork. The fat in pork is tran-fat free and mostly mono-and poly-unsaturated, so trimmed pork can be included in even cholesterol-lowering or "heart-healthy" diets.

Pork provides protein, fat and a range of vitamins and minerals. It contains high B1 vitamin content and is a good source of B2, B6, B12 and Niacin. Pork quality can be classified into various categories based on color, texture (firmness), and exudation (drip loss), etc.

Pork can be simply defined as the meat obtained from the animals known as pigs. Pork has gained a lot of popularity in many countries and is cooked with versatile techniques in most of the countries.