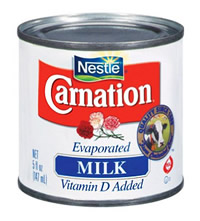 Many baked goods or desert recipes call for evaporated milk or sweetened condensed milk as one of the primary ingredient. This could be added along with milk or replace milk altogether. These are two types of milk products and are similar to each other in many ways. These two are confusing for many people as they have similar packaging and even resemble in terms of look, with slight differences. So, what makes these different from milk and each other? The answer to this question is quite simple. It’s even mentioned in the name; evaporation and condensation. Let’s understand each one separately.

Evaporated milk, as the name suggests, is basically milk that has been evaporated to remove about 60% of water from the milk. Evaporated milk requires boiling the milk at a high heat to remove water from the milk, making it thick in consistency. About.com states that the boiled milk is then homogenized, rapidly chilled, fortified with vitamins and stabilizers, packaged, and finally sterilized. The high heat required to evaporate the water causes some of the natural sugars in the milk to caramelize resulting in evaporated milk to have a slight yellow/brown tinge to it.

For milk to be considered as whole evaporated milk, it must contain at least 7.9% milk fat and 25.5% milk solids. However, the evaporation process concentrates the nutrients and the calories in evaporated milk, making it healthy and unhealthy at the same time. For people that are looking for a healthier option can opt for skim and low-fat versions that are also available. These two versions come with added with vitamins A, C and D. Many recipes also call for a water-down version of evaporated milk and that can be achieved by mixing evaporated milk with water or regular whole milk. 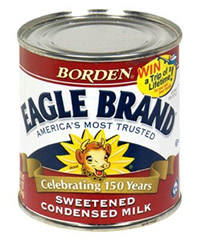 For milk to be considered sweetened condensed milk, it must contain at least 8% fat and 28% milk solids. This is slightly higher because of the sugar that is added to the milk. The condensed milk is pasteurized during the evaporation process and sugar eliminates the need for sterilizing the product. About.com explains that since sugar inhibits the growth of microorganisms, the food does not require further sterilization. Government requires vitamin A be added by law, while other nutrients can be added but that is up to the producer.

So in actuality, evaporated milk and condensed milk are quite similar with the only difference being in the sugar content. The two products are also used for different purposes such as evaporated milk is a common ingredient of soups, curries, baked bread, etc., while sweetened condensed milk is used in cakes, deserts and other baked sweets. Both of these were developed following the need of milk to last longer when no refrigeration was available. Condensed milk can be dated back to France in the 1820s, but it became popular in the US by Gail Borden Jr. after he saw that people could not afford to store milk at homes because of it spoiling and curdling very fast. He also noted that milk was found actively only in places where cows were in near vicinity. He created condense milk to provide a more longer-lasting product for people who did not have easy access to the milk. These products have a high shelf life and the unsweetened one can last up to 15 months, while the sweetened one has a shelf life of two to three months, both can last longer, although it is not advised.