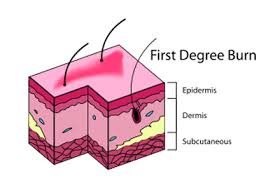 1st, 2nd and 3rd Degree Burns are based on the classification of burns on the basis of their severity. First degree burns are of lowest impact, whereas 3rd are of highest impact and affected.

In first degree burns, the top layer of the skin gets damaged but it is not destroyed. The color of the skin changes to bright pink or very red. In this situation, the pain can be mild to extreme. Blisters are not observed in these types of burns.

These types of burns are generally caused by hot liquids or grease coming in contact with the skin. As only the outer layer of the skin gets affected, one can just treat them by cool water for about ten minutes and then applying an aloe cream which will help in providing soothing effect on the skin. 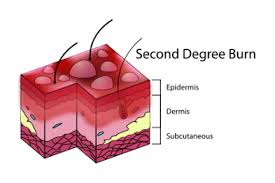 Moving on to second degree burns, these burns are more severe than the first ones. They are generally caused by sunburn or by chemical exposure. Unlike first degree burns, the outer skin here is destroyed too in addition to damage to the skin. However, it does not destroy the second layer of the skin, it just gets damaged.

After the damage on the outermost layer of the skin, this second layer of skin is revealed. This layer too turns red or pink. Blisters are commonly formed in these types of burns, and thus are used as identification sign for these burns. 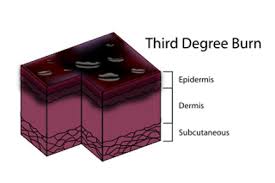 Most severe and dangerous of these all are the third degree burns, which are caused by radiation or corrosive chemical exposure. In addition to the first and second layer of the skin, they tend to affect the third layer of the skin and also cause scarring. They cannot be treated with simple first aid. A medical attention is required to treat these burns.

It causes damage to all layers of the skin. The pain may or may not occur depending upon the damage on nerves. This destruction of nerves is responsible for not feeling pain by the patients.

Therefore, they all are quite different from each other in aspects like characteristics, treatments and causes.