Key Difference: A Universal Serial Bus (USB) flash drive is a portably type of flash memory device. It includes a printed circuit, a flash chip and a USB connector. These components are protected inside a hard plastic, metal or rubber case. An external hard drive or a portable hard drive works in the same way as the internal hard drive, except that these are portable. A hard drive is a non-volatile random-access, magnetic data storage device.

In today’s computer age, almost everything is done on a computer. With the ever expanding amount of data one can acquire, a constant need of additional memory is required. In these cases, memory can be expanded or made portable by using hard drives or flash drives. Though hard drives are available in two types, internal (one that is stored in your computer) or external (portable form of hard drive), in this article we will cover the external hard drive. 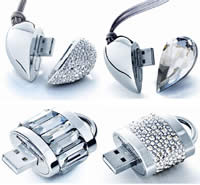 A Universal Serial Bus (USB) flash drive is a portably type of flash memory device. It includes a printed circuit, a flash chip and a USB connector. These components are protected inside a hard plastic, metal or rubber case. Flash drives were invented in 1999 by Israeli company, M-Systems, though their patent describes a product that has a cable between the memory unit and the USB connector. IBM also filed a patent in 1999, whose design was more similar to the flash drives we have today. USB flash drives are similar to the old floppy disks, which also saves data in flash memory. The main purpose of flash drives is not for long term storage, but rather short term storage and data transfer. Flash drives, compared to old diskettes and CD-ROMs, are faster and has more storage capacity. They are also more durable and reliable as they have no fragile moving parts.

Previously, flash drives were only capable of holding data up to 2GB, but with recent technological advances flash drives these days are able to hold up 256GB, and drives up to 2TB are under development. Flash drives use minimal power to transfer files and weighs less than 30g. A drawback of flash drive includes that it has a limited write/erase cycle, after which the device needs to be replaced. Also the circuit chip is soldered to the USB connector and if the solder breaks, rendering the device useless. These days, flash drives allow up to 100,000 write/erase cycles, depending on chip type and a 10 year shelf storage time. In terms of price, per GB data is more expensive compared to external hard drives. USB flash drives are almost compatible with every computer, including other systems such as digital audio players, Xbox 360, PlayStation 3, DVDs and a few upcoming smartphones. Flash drives are also available in whacky and crazy designs, such has in doughnut shapes or cartoon character shapes.

An external hard drive or a portable hard drive works in the same way as the internal hard drive, except that these are portable. A hard drive is a non-volatile random-access, magnetic data storage device. It was introduced by IBM in 1956 and has been the most commonly used storage device in computers. A hard disk drive contains one or more rigid rapidly rotating discs coated with magnetic material. Magnetic heads are placed on a moving actuator that is used to read/write data on the magnetic tape. The read/write heads are supported on a thin layer of air inside the enclosed disk unit with only tiny gaps between the heads and the disk surface.

A hard disk is similar to old cassette tapes, which also recorded data on a magnetic tape, though these have a much higher storage capacity and does not require reading the whole tape in order to find one significant file. Modern drives have platters (the discs) coated with two parallel magnetic layers, separated by a 3-atom layer of the non-magnetic element ruthenium, and the two layers are magnetized in opposite orientation, in order to keep from losing data to thermal effects.

External hard disk drives are available with data up to 2 terabytes; however, due to system usage and reporting, not all of the specified storage is ever available for user storage. These hard drives are also connected using USB cables and are plug and play devices. They are usually available in 2.5 inches to 3.5 inches in size and are available with storage capacity up to 160GB, 250GB, 320GB, 500GB, 640GB, 750GB, 1TB, and 2TB. External hard drives can either come preassembled or can be assembled by combining a hard drive with a USB or similar interface.

Hard drives are also considered a safer option compared to USB flash drivers, as they are less susceptible to viruses and are available with firewalls. They can also be combined with biometric security features to keep data safer. They are also cheaper compared to USB flash drives. Drawbacks of hard drives include that data can easily be wiped out using shock or vibrations or magnetic waves and they are difficult to operate in high altitudes. A hard drive’s components are also more expensive compared to flash drive for replacement.

No.External is cheaper than flash drives. It was based on the amount of gb.If you buy ten 64gb in just 10 bucks,it is more expensive than a 500gb with just 100 bucks.

USB Flash Drives are cheaper now than the external hard drives, storages up to 2TB too. You should update this