Difference between Islam and Catholicism

Key Difference: Catholicism believes in Jesus Christ as the son of God, and the promised Messiah of the people. Islam believes that Jesus and Muhammad are prophets of the Lord and tasked to bring the true word of God to the people. 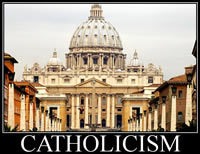 Catholicism, a sect in Christianity, believes in the Holy Bible and the Roman Catholic Church. The Roman Catholic Church is the Holy See centered in Vatican, Rome, and headed by the Pope, the Bishop of Rome. Catholicism believes that Jesus is a messenger of God, as well as, God himself. In addition, they consider that only Jesus can save them from all sins, as he sacrificed his life for the sins of his people on the cross.

Islam also believes in the original texts of Judaism and Christianity, but believes that the modern texts have been corrupted. Muslims believe that the after the corruption, Allah finally sent Muhammad to sum up and to finalize the word of God. Gabriel, the angel, delivered the Qur’an to Muhammad, the prophet and the messenger. They believe that on the Day of Resurrection, Jesus and Muhammad will rise on Earth to fight the false Messiah (the Anti-Christ), and to bring all the people under the true word of God (the Qu’ran). 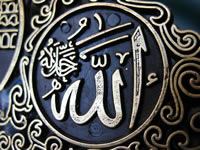 Both Catholic and Islam have similar practices in fasting and giving alms to the poor. Both utilize prayer beads, and take pilgrimages to receive blessings from God. However, Islam dictates the member should pray five times a day. It also prohibits foods including pork products, blood, carrion, and alcohol. All meat should be halal, i.e. come from an herbivorous animal slaughtered in the name of God by a Muslim, Jew, or Christian.

In modern times, Islam has been criticized for its strict traditional believes and its treatment of women. Even though this has been changing to some aspect due to modernization, there are some sects who force members to follow the traditional law and rules.

For more differences between the two religions, refer to the table below:

Catholics do also believe that salvation comes from both faith and works. The idea that belief alone is sufficient is a Protestant concept and is incorrect.

Wrong fact- Jesus is not seen as a reincarnation of God and the original language is not Latin, but Aramaic, the origins are in Galilee not Rome.

Please change the wording on Idol for Christianity. We do not idolize anything/anyone but God. These objects we venerate, and if they are not blessed, they mean as much to us as you would a picture of someone you loved that has passed away. I came here looking for the differences between Christianity and Muslim & I thank you for all this hard work, but "Idols" is against Christianity & one of the most misunderstood things about our faith. Icons were used heavily because back in the day people could not read, as a matter of fact it was Christianity that started the education outside of nobility as well as hospitals following Jesus (he would preach to the outskirts of towns where people who were ill were thrown out like garbage).Thank you!