Difference between Xmas and Christmas

Key difference: Christmas is the Christian holiday for commemorating the birth of Christ, as celebrated on December 25 annually. ‘Xmas’ is a common abbreviation of the word Christmas, in use for over a thousand years.

Christmas is the Christian holiday for commemorating the birth of Christ. It is celebrated worldwide on December 25 by billions of people. Christmas is a civil holiday in many of the world's nations, and hence is often celebrated by an increasing number of non-Christians.

Christmas is the holiday of gift giving, Christmas music and caroling, an exchange of Christmas cards, church celebrations, a special meal, and the display of various Christmas decorations, including Christmas trees, Christmas lights, nativity scenes, garlands, wreaths, mistletoe, and holly. It is also when Santa Claus, Father Christmas, Saint Nicholas or Christkind bring gifts to children during Christmas who have been good through out the year. In addition to a religious holiday, Christmas has become a heightened economic activity among both Christians and non-Christians, due to all of the gift-giving. 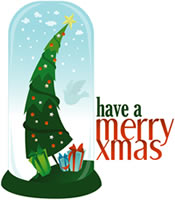 The word ‘Christmas’ originated as ‘Christ's Mass’. It is derived from the Middle English Cristemasse, which was originally Crīstesmæsse in Old English. The phrase was first recorded in 1038. ‘Xmas’ is a common abbreviation of the word Christmas. Contrary to popular belief, the word has actually been in use for millennia. The word originated as X comes from the Greek letter Chi, which is the first letter of the Greek word for Christ. The word X was often substituted for Christ in the Greek version of the New Testament. So, logically, Christ’s Mass was also shortened as X-Mass, and eventually Xmas, corresponding to Christmas.

A common misconception today is that Xmas is a secular attempt to remove the religious tradition from Christmas by taking the ‘Christ’ out of ‘Christmas’. However, they fail to realize that X is actually an abbreviation for Christ, one that has been in use for over a thousand years. Xmas has just gotten a lot of recent popularity as it is shorter to write, and is often used by youngsters and by advertisements targeting youngsters.

Still, it is considered informal to use Xmas instead of Christmas. Many Christians may also find it rude. In the 1948 Vogue's Book of Etiquette, Millicent Fenwick stated that “‘Xmas’ should never be used” in greeting cards. Furthermore, The Christian Writer's Manual of Style, while acknowledging the ancient and respectful use of ‘Xmas’ in the past, states that the spelling should never be used in formal writing.