Difference between Fleas and Nits

Key difference: Fleas are tiny, wingless, parasitic insects that live and feed on blood from humans, dog, cats, and other animals. Nits, on the other hand, are the eggs produced by the hair lice. In some countries like United Kingdom, Australia and New Zealand, the term ‘nits’ may be used to refer to the lice itself. However, usually ‘nits’ refer to the eggs of the lice that have already hatched.

Fleas are tiny, wingless, parasitic insects that live and feed on blood from humans, dog, cats, and other animals. There are over 2000 different species of fleas. Fleas are agile, usually dark colored with tube-like mouth-parts adapted to feeding on the blood of their hosts. Their legs are long, the hind pair well adapted for jumping: a flea can jump vertically up to 7 inches (18 cm) and horizontally up to 13 inches (33 cm). Fleas generally have a reddish brown flat body shape.

Fleas breed close to the resting and sleeping places of the host, in dust, dirt, rubbish, cracks in floors or walls, carpets, animal burrows and birds’ nests. They prefer high humidity to develop. The larvae feed on organic matter such as the feces of the host, small dead insects and undigested blood expelled by adult fleas. The adults go out in the night and feed of the blood of humans or animals.

Also, the fleas leave a series of bites when they feed. The bites generally result in the formation of a slightly raised, swollen itching spot with a single puncture point at the center, which is similar to a mosquito bite. The bites often appear in clusters or lines of two bites, and can remain itchy and inflamed for up to several weeks. The bites can cause irritation, serious discomfort and loss of blood. Severe symptoms may include hives, severe itching, small bumps that itch and may bleed, and/or allergic reactions to flea saliva resulting in rashes and/or impotence.

After the flea finishes feeding, it rests in cracks, crevices, carpets and bedding. Hence, it can be hard to find and to pin point a flea infestation. Also, the eggs can hatch after weeks of being laid and start the infestation anew.

There is no effective way to prevent fleas. It is however easier to manage and get rid of a flea infestation in the earlier stages, rather than later. There are two basic ways to address the problem: try to prevent any stage of the pest from entering the home and keep immature stages from maturing into adults.

For prevention in pets, using a flea comb on the cat or dog and wash the bedding weekly has proved to be effective. For humans, an effective repellent applied to skin and clothing, prevents fleas from attacking for a few hours. Other effective measures include dusting clothing with insecticide powder, or by using insecticide-impregnated clothing, keeping houses well swept and floors washed, treatment of floors with detergents, insecticides or a solution of naphthalene in benzene, and spraying or dusting insecticides into cracks and crevices, corners of rooms and areas where fleas and their larvae are likely to occur.

Fleas can be quite dangerous, as they can act as a vector for disease. Fleas transmit not only a variety of viral, bacterial and rickettsial diseases to humans and other animals, but also protozoans and helminths.

Nits, on the other hand, are the eggs produced by the hair lice. In some countries like United Kingdom, Australia and New Zealand, the term ‘nits’ may be used to refer to the lice itself. However, usually ‘nits’ refer to the eggs of the lice that have already hatched. 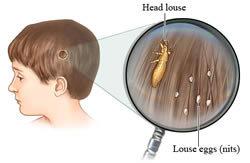 Head lice are a very common problem, affecting millions of people each year. They commonly affect preschool and elementary school-aged children, who unknowingly infect each other and others close to them, such as family members. However, getting a head lice infestation is not a sign of bad personal hygiene or an unclean living environment. It is an itchy infestation commonly spread through close personal contact and by sharing personal belongings, such as caps, hats and scarves, brushes and combs, hair decorations, such as barrettes, and headphones. It may even rarely spread through home furnishings, such as towels, clothing, blankets, pillows, upholstered furniture.

Female head lice lay up to 3-5 eggs a day. These eggs are attached to the root of an individual hair strand by means of a special type of glue excreted by the female lice. The eggs are attached usually between 1/16 to a 1/4 inch away from the hair. This is so that when the eggs hatch, the young lice have close access to their food source, i.e. the scalp. Furthermore, in order for the eggs to hatch and survive, they need the heat from the scalp as well. Nits, i.e. hatched eggs, will be usually found more than about 1/2 inch from the scalp. Once the eggs have hatched, the nits remain glued to the hair shaft and grow out as our hair grows.

The louse, itself, has six legs and scuttles very fast, like a crab, as oppose to jumping. It has pincers at the end of the legs, similar to crabs, which allow them to hold on the hair. Hence, lice are harder to find and dislodge from the hair.

Lice can survive on blood, dead skin particles, among other things. Lice also do not usually leave bite marks in the skin. They just cause itchiness in the scalp. Some types of lice are known to leave small, red bumps on the scalp, neck, and shoulders, which may become crusty and ooze. However, these are rare occurrence. Furthermore, lice spend their entire lives linked to human beings, usually a single human. Hence, they are not able to carry and spread diseases.

Unhatched lice eggs are light-colored when they are first laid, usually yellow-tinted or grey. Right before hatching, they turn darker shades of tan or coffee. After they hatch, the nits are white to cream in color. They look like a tiny teardrop about the size of a pin head. Due to their color and size, nits are often mistaken for dandruff.

The most common way to differentiate between dandruff and head lice is to check the scalp for louse. However, if a grown louse cannot be found, a way to ensure lack of infestation is to check after shampooing the hair thoroughly. If the white flecks have disappeared from the scalp then it is dandruff, however, in case of head lice, the white flecks will remain and so will the itchiness.

Nits, like unhatched eggs and lice, should be combed out of the hair with a special comb. They may also be treated with nonprescription shampoo that's specifically formulated to kill lice. There are also various home remedies, one could try. Furthermore, all personal belongings such as caps, hats and scarves, brushes and combs, hair decorations, and even home furnishings, such as towels, clothing, blankets, pillows should be cleaned thoroughly. As an added precaution, upholstered furniture, rugs, carpets can also be vacuumed.