Difference between Forensic Science and Criminology

The word ‘forensic’ comes from the Latin (forēnsis), meaning ‘of or before the forum.’ The origin of the word forensic meant for the form of legal evidence and category of public presentation. It was found by the Romans. In the modern times, the term forensics is used in place of forensic science, which is used for legal matters.

The existence of forensics was found in the late 18th century, by French physician Fodéré in his writings “A Treatise on Forensic Medicine” and “Public Health” and by German medical expert Johann Peter Franck in his writings “The Complete System of Police Medicine”. 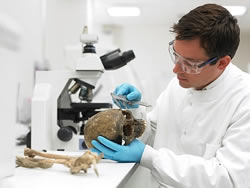 Forensic science (commonly known as forensics), is a science and technique to find out and investigate crime on the basis of evidence. Forensic science is mainly utilized in solving crimes and the enforcement of laws, such as criminal and civil laws. It is are also practiced in the field of astronomy, archaeology, biology and geology for investigating the ancient times. It is especially practiced on the basis of chemistry and biology to solve the legal matters or issues. Along with being a vast study, it is also subdivided into many fields and studies based on their types.

Forensic scientists collect and analyze the physical evidences, such as blood and other bodily fluids, shell casings, hair and fibers, to help solve crimes.

Criminology (from Latin crīmen, means “accusation”) is a scientific study of nature, extent, causes, control, and prevention of the criminal behavior of both the individual and society. The term criminology was coined in 1885 by Italian law professor Raffaele Garofalo as criminologia. Later, French anthropologist Paul Topinard used the analogous French term criminologie.

In the mid 18th century, the social philosophers gave thought to the crime and concept of law, due to which the criminology aroused. The criminology is based on three main schools of thoughts, which are mentioned in the early criminological theory period (mid-18th century to the mid-twentieth century). They are Classical, Positive, and Chicago, which were superseded by several contemporary paradigms of criminology, such as the sub-culture, control, strain, labeling, critical criminology, cultural criminology, postmodern criminology, feminist criminology, etc.

These are interdisciplinary field in the behavioral sciences, where the researches are conducted by the sociologists (particularly, the ones from the field of sociology of deviance), psychologists, psychiatrists, social anthropologists and from the writings of law. Their research area includes the incidences, forms, causes and consequences of crime along with the social and governmental regulations and reaction to the crime.

Comparison between Forensic Science and Criminology: