Difference between Format and Quick Format

Formats are usually used when trying to wipe out a computer of all the old files and re-installing the OS on to the computer. It can also be used to completely clear a device (i.e. USB, flash drives, etc.) of data as well. There are two ways that a person can remove the data, either using a normal format or a quick format. These two perform the same purpose, but still differ from each other. 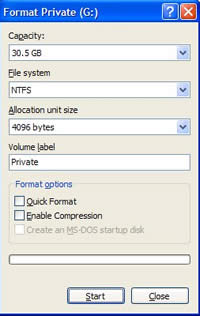 Formatting is the process of preparing a data storage device for initial use. This must be done before an OS can be installed on a system. It can also be done to prepare an external device for use. Contrary to popular belief that formatting removes the data from the drive, the data is actually still on the drive. However, formatting only clears the file allocation table or the master file table (MFT) so that when the OS accesses the disk, it perceives that there is nothing on the disk. The new files the user saves then over writes the original files. These files are not lost though, any file that has been removed while formatting can be recovered using special tools as long as new data has not been written over the old data. Even after saving new files, the files that have not yet be overwritten on can be recovered.

When a person purchases a new hard disk or drive, it requires the data on this drive be first formatted before usage. This is because the drive does not contain any file structure or logical disk. The new drive or disk contains raw sectors that can hold data, but the computer would not be able to read this data as there is no Master File Table (MFT) that tells the computer where files begin and where they end. The format creates file structures which creates a list or a table of all the file names and metadata of each files that are saved on the drive. The newer file systems have a MFT, while the other ones had FAT (File Allocation Table). The MFT is basically an index that lists the name and metadata of all the files that saved on the disk. When, a disk is formatted, the MFT is cleared, which the computer reads as an empty drive. When purchasing an external drives such as pen drive or external hard drive, these come with already built file structures and do not require to be formatted. However, it is better to first full format each disk before saving data on it.

Now, a normal formatting will remove the files from the Master File Table (MFT) and will also scan the drive for bad sectors. The scanning is actually the time consuming process, while removing hardly takes any time at all. Depending on the size of the drive, formatting time will vary. Regular formatting would wipe the content from the volume that is being formatted and then will confirm that the data has been wiped. It would then go on to scan each sector to detect bad sectors and then mark them so that it would not access these sectors in the future. However, regular formatting cannot repair or remove the bad sectors; it can only mark them off. To repair and remove the bad sectors would require a low-level formatting.

Quick formatting performs a similar function where it removes the data from the partition that is formatted and erases the MFT, but it does not scan the sectors for bad sectors. For example if a FAT file system is quick formatted, it would remove the files from the FAT system and the directory, but it would not scan the system for bad sectors. Bad sectors would not be able to save and read data and would produce errors when trying to access the data on that drive. Hence, quick formatting should only be opted when the user is sure that there are no bad sectors on the computer or a regular formatting has already been done recently.