Key Difference: A bar chart consists of a number of vertically or horizontally placed bars and the length of the bars defines the relative magnitude of the values. It uses rectangular bars with lengths proportional to the values that they represent. A Gantt chart is a horizontal bar chart used for project management. It is used to represent the timing of various tasks that are required to complete a project

Charts are used for pictorial representation and thus are widely used for various purposes. Charts are used to project the relevant information in an effective manner. There are numerous kinds of charts that are used and every chart has its own features and uses. One such chart is known as a bar chart. Some people may confuse between a bar and Gantt chart. However, the fact is quiet simple; Gantt chart is simply a type of bar chart. Let us understand the definition of bar charts and then the definition of Gantt chars, and on the basis of these definitions, it will be clear that Gantt is a kind of bar chart. 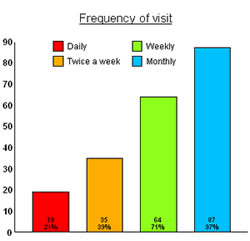 1. Graph title: - it defines an overview of the bar chart.

2. Axis and labels: - every bar graph has two axis and the axis labels indicate that what information is presented using that particular kind of axis.

3. Grouped Data Axis: - it is present at the base of the bars indicating the type of data that is presented.

4. Frequency Data Axis: - it defines the frequency or amount corresponding to the other axis’s data.

5. Axes Scale: - it depicts the range of values presented in the frequency axis.

6. Bars. These are the rectangular blocks and represents data corresponding to one of the data groups.

Gantt charts are used to project the relation between the task and the time associated with it. It is a horizontal bar chart which was developed by Henry Gantt in the year 1910. It is mainly used in the field of project management.

Project management deals with scheduling of various tasks and tracking them for the correct implementation. Thus, it is very effective in depicting the work breakdown structure of a project. These charts help in keeping an eye on the various activities and phases of a project. 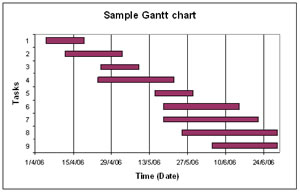 Thanks a lot !! Was indeed crisp and yet a clear perspective. One doubt, can the GANTT charts be used to compare the plan vs actual project status of a project? And why in Histograms there is no gap and why bar graphs are having gaps, whats the objective of providing spacing between the bars Best Regards

Thanks , It was a helpful information