Difference between Ghee and Butter

Key Difference: Ghee is clarified and further process butter, while butter is a diary product that is made from churning fresh or fermented cream or milk.

Butter and ghee are two things that are used daily. Butter is commonly used in western countries, while Ghee plays a huge part in South East Asian Countries such as India, Pakistan, Middle East, etc. Butter and ghee are used as spreads or condiments or added to food to enhance the flavor. Though they are similar in usage, these are two different products and are made from two different processes. 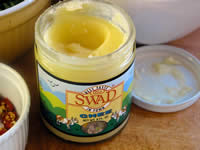 The term ‘ghee’ is often used in South Asian countries and it is known as clarified butter, butter oil, drawn butter or simply anhydrous milk fat (AMF) in western countries. Ghee is made by heating butter on a slow pan, which is then stirred slowly until the oil separates from the butter. It releases a froth, which is then strained out and discarded. The oil turns into a pale yellow which is then strained and stored as ghee. This process removes the milk solids from the natural butter oil. Ghee can be made by using butter from a variety of mammals. Ghee has a higher smoking point, which means it can be used for cooking in high temperatures. It is also used for frying, sautéing and adding a little extra flavor to the dish. Smoking ghee does not often produce a bad odor, which is caused by milk solids that burn up. Ghee is also considered to have more health benefits compared to traditional butter and oils and is also has fewer calories. Ghee can be stored for years if it is properly sealed and refrigerated. Ghee is also provided as a butter alternate to people that are lactose intolerant as the production removes the lactic acids from the ghee. 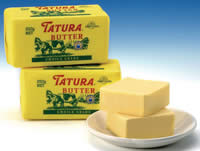 Butter is a diary product that is made from churning fresh or fermented cream or milk. It can be salted and unsalted. Butter is made from separating cream from milk. A forceful spin, known as centrifuge is used to quicken the process. Centrifuge allows the cream to separate from the milk. The cream is then churned until it turns into butter. The process however changes depending upon region and the technologies available. The cream can also be separated from milk using additives to speed up the process. Butter consists of butterfat, milk proteins and water. Butter is used in a variety of dishes as a topping, can be included in baked goods and can also be used in pan fry foods. Butter can be made from milk acquired from any mammal. Butter has a lower smoking point and if heated at high temperatures, it can cause the butter to burn and produce a distinct odor. Butter is considered to be unhealthy due to the amount of milk fats that are part of it.

South Asian countries actually use both, ghee for more rich flavors and butter as a condiment. Ghee has a separate distinct taste, which can be used to create stir fry dishes. Ghee is also has a variety of uses such as medicinal, which are proven to work effectively. Butter also has slightly acidic properties, while ghee is alkaline in nature.