Difference between Goals and Outcome 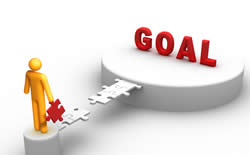 Goals and outcomes are part of a person’s life. Without goals, a person will be lost and will not have a direction when setting out to do something. He would not even know what he wishes to do in the first place. Outcomes are the results that are expected when a person sets small goals. Goals and outcomes are similar concepts, which results in them being often confused as the same. However, they are not the same. See Goal Vs. Ambition

A goal is a desired result that a person wishes to achieve. It is a target that a person wants to reach. It is an end-point of where a person sees himself after a certain period of time. Goals can be short term or long term. Short term goals are goals that are placed after a small amount of time, while long term goal requires a life-altering decision. A person can also set personal goals as well as professional goals. Personal goals include a vision for personal things such as marriage, child, home, etc; professional goals are related to the professional aspect of life such as job, career and so on. See: Vision Vs. Goal 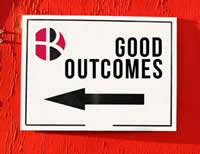 While goals are milestones that a person wants to achieve, outcomes are the possible results that will be achieved when a person completes the milestone. The outcome is basically the result of a certain scenario. Outcomes are also used in game theory, where the player anticipates the various different results of a move that he will make. For example, on a chessboard, if a player moves his white queen across the board, there will be a few moves that the opposite player can make. Those moves (if he moves his queen) will tell him the outcome of his move. That helps the player decide if he wants to move his queen in that direction. The outcome is the possibility of what happens when the goal is reached or completed. See: Aim Vs. Objective.

Goals and outcomes are interrelated and a person uses both simultaneously. Goals determine the outcome, while the outcome determines a goal. A person sets a goal to reach the outcome that he wants to reach, while outcomes help a person determine a goal he wants to set. For example, a person wants to become a lawyer. Now becoming a lawyer becomes his outcome, while he sets small goals such as acing the required tests, getting into a good college and other small tasks as his goals. The outcome is not limited though it can be changed and altered. Continuing with the example once the person becomes the lawyer; then he can change his outcome. Maybe his next outcome is to become a human rights representative and so on. Goals and outcomes complement each other and help each other along. However, people should keep in mind that goals and outcomes should be definable and can be completed. They should start small and then go on to the big things. If a person sets a big goal and an even bigger outcome, he may be setting himself up for failure. It is a step by step process.

I have been struggling to find a good definition that would set the limits of each other and most of the website and papers even dictionary would put goals in the definition of outcome and outcome in the synonym of goals. Thanks