Difference between Vision and Goal

Key Difference: Generally, people get confused with the words, ‘vision’ and ‘goal’ but there’s a vast difference in both the terms. Vision means the ability to see, or plan something for the future. Goal is an aim or purpose to achieve or obtain.

The main difference between the two is that, 'Goals' are always specific but 'Vision' is foresight. It has a long view that how you and your organization will look like. Goals have a plan of action but vision is a dream which has a long term view. In any organization, vision and goal plays a vital role.

Vision is always a future-oriented program. It is an image that what you want to create. It is not about an individual’s image, it is about what they want to become. Vision should be greater than goal and to have a vision, one has to visualize and imagine a lot of things. 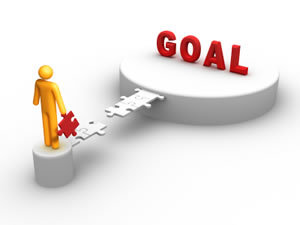 Establishing a personal vision begins by asking yourself some simple, but profound question:

Once you have answers for these questions, you’ll have a clear vision.

Goal is what one is determined to do so whatever he wants to achieve in his life. They are dreams with deadlines. One should clearly know if they can hit that or not. There should be a correct planning and management to reach their goals.

They are not dependent on each other, but they do have a relation to reach some where what one has planned. For a vision to be meaningful and motivating it should come by looking deep into the ideal future and according to that perspective you can set goals. When we need to set a goal, a person has to leave their past and think about the reality. However, in order to create an effective vision, one has to free himself with the current reality and think in terms of possibilities.