Difference between Hangi and Umu

Key Difference: Hangi is the traditional form of cooking for New Zealanders (Maoris). Umu is another name for Hangi, but specifically referring to the process for cooking cabbage trees. It is most commonly used in South Island. 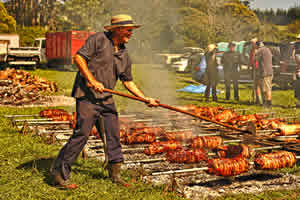 Hangi is also known as Earth oven. It is the best traditional form of cooking for Maori. The food is cooked by heating rocks which are buried in a pit oven or cooking pit that is the most simple and long-used cooking structures. It is a big ground where large baskets of food are placed on the top of heating stones and everything is covered with earth for several hours before lifting the hangi. The traditional hangi cooking principals are now used primarily for special occasions. The Maori use of this process is identified in their prayers, songs, dance and story telling that go back centuries. A similar method of cooking was and is still used in Chile, the Balkans, and various parts of North Africa and the Middle East.

In the early 19th century, many different hangi methods came into existence. Wire baskets with sacking and cloth replacing leaves and bark as the covering of choice was widely used. Finally in the 21st century, gas heated stainless steel, which is known as ‘hangi machines’ is sometimes used to copy the style of cooking. 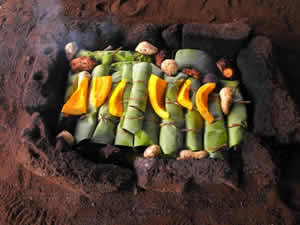 Foods with this method of cooking are prepared in three sections: Meats (pork, beef, lamb, shell fish, fish), kumara, vegetables such as potatoes and puddings.

Umu is another name for Hangi, which is most commonly used in South Island to cook cabbage trees, which are a widely branched monocot tree prevalent to New Zealand. Umu was especially used in the older texts. The longest food which was cooked in a large stone lined pit was carrot shaped tap root that was .900 long. It took between 1 to 2 days to cook. The fellow Island neighbors in the Pacific also used this method.

Comparison between Hangi and Umu:

I must say that this description of the difference between hangi & umu is missing specifics. Hangi is the Maori word for earth oven & Umu is the Pacific Island term for earth oven. The method of this process differs considerably. For example - The Maori hangi method is a hole dug into the earth (whatever width is required) up to 2 ft deep & loaded with hot stones/rocks and wrapped food items in flax baskets are placed on the hot stones & covered with large leaves & sacks to contain the heat untill the food is cooked through. An earthy flavour is distinct to this method. The Samoan Umu method is NOT a hole in the earth but is a process of cooking carried out on the surface of the earth. Hot lava rocks & stones are piled in a heap on a bed of banana leaves with wrapped food items along with meats placed within the pile of rocks and finally covered with a number of layers of banana leaves & other large leaves. No sacks are used. The cooked food DOES NOT have an earthy flavour. Some other Pacific Islands use variations of these two methods.