Difference between Happiness and Satisfaction 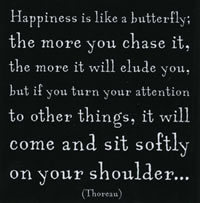 Basically, happiness is both a state of mind and an emotion. Happiness is one of the base emotions that humans strive for, yet it is the emotion that most humans complain they do not attain. It is human nature to strive for more, they are never happy with what they have. Some philosophers claim that if people would learn to appreciate what they have rather than gripe about what they don’t, they would be happier than they are now.

There are various factors that have been related to happiness. Someone may feel happy at the tiniest provocation, such as a great meal, or someone might not even feel happy after a great milestone, such as the fulfillment of a life wish, or in some cases, the happiness might fade away quite quickly. However, there no validated method has been found to substantially improve long-term happiness in a meaningful way for most people.

According to psychologist, Martin Seligman, happiness can be attainted with PERMA. PERMA is part of the positive psychology's correlation findings, which claims that humans are happiest when they have either Pleasure – tasty foods, warm baths, etc., Engagement –absorption of an enjoyed yet challenging activity, Relationships – social ties, Meaning – a perceived quest or belonging to something bigger, i.e. religion, or Accomplishments – having realized tangible goals.

Satisfaction, on the other hand, is the contentment that one feels when one has fulfilled a desire, need, or expectation. It is a state of mind where one feels content after a demand or desire is fulfilled, one may also feel satisfied if one’s demands and desires are about to be fulfilled or if the fulfillment is possible.

However, satisfaction and happiness is correlated on some level. Satisfaction may lead to happiness, while lack of satisfaction will lead to lack of happiness. For example, a person is expected to hand in a report by Friday. If he hands in the report, then he is satisfied that he completed his allotted work. If the report is well made, or if the boss complements the employee’s timeliness, then he would also be happy that his work was appreciated.

Happiness can come from within too.

May I know who is the author?