Difference between Hardwood and Softwood Pellets 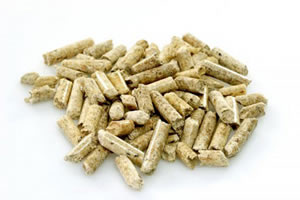 Pellets are a heating fuel that is made from compressed biomass. Essentially, wood pellets are made from compressing sawdust or other waste products left over from processing wood. They may also incorporate palm kernel shell, coconut shell, or tree tops and branches leftover after logging.

Pellets are commonly burned as fuel in a pellet stove or a pellet burner used in electric power plants or homes. Pellets have grown in popularity today, due to increased concerns over the environmental impact of burning wood as a heating fuel. Pellets generally have higher combustion efficiency and a lower environmental footprint, as it made from products that would have gone to waste anyway.

Wood pellets are commonly made from either hardwood or softwood. Hardwood and softwood are two categories used to classify different types of woods. Many people consider that hardwood is named such because it is harder and denser than softwood. This is true often enough, but not all the time. Take for example the balsa wood, which is soft, light and less dense than most other woods, but is classified as a hardwood. The classification of the wood is not actually done on the basis of weight or density; rather it is done on the basis of plant reproduction.

Hardwoods are used for various applications such as fuel, tools, construction, boat building, musical instruments, flooring, cooking, barrels, manufacture of charcoal, etc. However, most people relate hardwoods for use in home furnishing and furniture. The most commonly used hardwoods for furniture include oak, ash, acacia, mango and mahogany.

Softwoods generally are wood from a gymnosperm tree. A gymnosperm is a type of tree that has seed that have no covering and tend to fall to the ground. Gymnosperms reproduce by forming cones which emit pollen to be spread by the wind to other trees. This allows the seeds to spread out and grow over large areas. This is also the reason why most softwood trees tend to grow in huge tracts that may spread for miles like ‘woods’ and ‘forests’.

Most softwood tends to come from conifers like pines, firs and spruces. Conifers are also commonly called evergreens because their leaves tend to stay green and do not fall to the ground in cycles. Some famous softwood trees are pine, redwood, fir, cedar, and larch.

Softwood is quite popular and common. It is in fact the source of about 80% of the world's production of timber. It has various applications, of which the most popular are woodwork, and furniture. Softwood is more commonly used for furniture than hardwood, mainly because is tends to be cheaper. This is due to the fact that softwood trees tend to grow faster and hence are easier and cheaper to produce. This also makes softwood more environmentally friendly, as it can be more readily renewable than hardwood.