Difference between G8 and G20 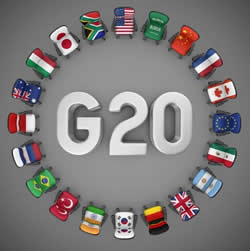 G8 is older, which came into existence in 1997. These are the groups that are the powerful economic democracies in the world. It brought together the eight countries: France, Germany, Italy, Japan, UK, US, Canada and Russia. Before G8, in 1975, G6 was in existence leaving Canada and Russia, then in 1976 Canada joined. Finally, Russia joined the group in 1997 making it G8.

G20 or Group of Twenty has recently come into existence that has a direct outgrowth of the evolving effort of the G8 to bring other major economic nations into the process. In November 2008, the first meeting of the G20 was held in Washington, D.C. Argentina, Australia, Brazil, Britain, Canada, China, France, Germany, India, Indonesia, Italy, Japan, Mexico, Russia, Saudi Arabia, South Korea, Turkey, US and the European Union are the twenty member nations who all are included in G20.

G20 has basically grew out of the G8 in an attempt to provide an expanded forum.

Comparison between G8 and G20:

This is really a good idea. We can make this a big deal. I've shread this link to Weibo and QQ group. And I think, if you can revise your words into a formal form, would be better for the following readers